Make no mistake. No Reservations is a show primarily about food. That doesn’t mean that every episode is only about food or that the entire length of the program is centered around food. Sometimes an episode focuses more on the people, culture, history, geography, or various other aspects of a location – instead of only the food.

No Reservations Australia was about food. Not necessarily Australian food either. More like food that happened to be made in Australia. Like so many other places on this planet, globalization is in full effect in Melbourne, Australia. The food is heavily influenced, if not outright made and served by, people from other cultures around the world. This episode, rather than focusing on the Australia we all think we know (shrimp on a barbie, Aborigines eating bats in the outback, and kangaroos) it focused on the side of Australia we probably never knew was there. I blame Crocodile Dundee for my skewed view of Australia.

I suppose Tony’s little black book being chocked full of amazing chefs all over the world helps – since we undoubtedly saw a side of Melbourne cuisine that most of us probably couldn’t afford. But I’m ok with that. No Reservations is the world through Tony’s eyes – not mine. Through Tony’s contacts, budget, and experience – not mine. And every single week I look forward to that… whether or not it depicts an experience that I could ever have or not. 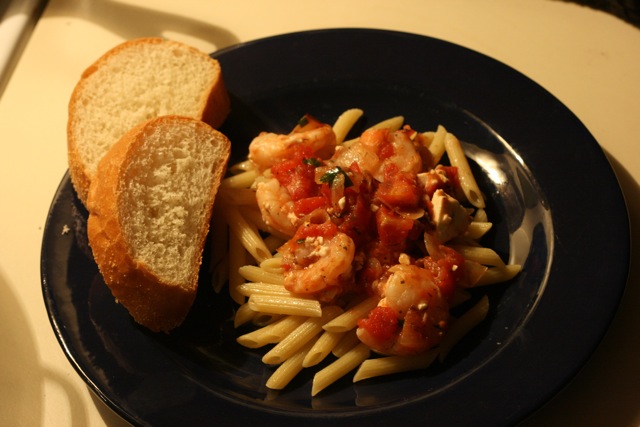 I decided to make something a little different for this episode. Yes, I made shrimp but I decided to add a little bit of an Italian flare (read: make my own basic tomato sauce and throw it over pasta). There was no indication that Italy has had any real effect on the food in Melbourne, Australia in this episode (although I’m sure it has)… but there was a lot of showing many other areas that obviously have had a huge impact. British, Lebanese, and Sichuan influences were highlighted the most. I need some Sichuan food at my next opportunity.

When No Reservations focuses on food everything else seems to fall into place.