Hiked in September 2016 – Approx. 6.0 miles – I parked my car in the small parking area on Rowland’s Road where Kennedy Creek and Abington Trails meet. I started walking south on Rowland’s Road towards Route 524, crossed the road, and entered the Abington trailhead.

This area of the trail quickly rises from 1000′ to about 1200′. It is a good hike up this side of Turkey Hill and you should be prepared to breathe. You can see some of the lake as well as a few of the farms north. Nice spot for a photo or two. 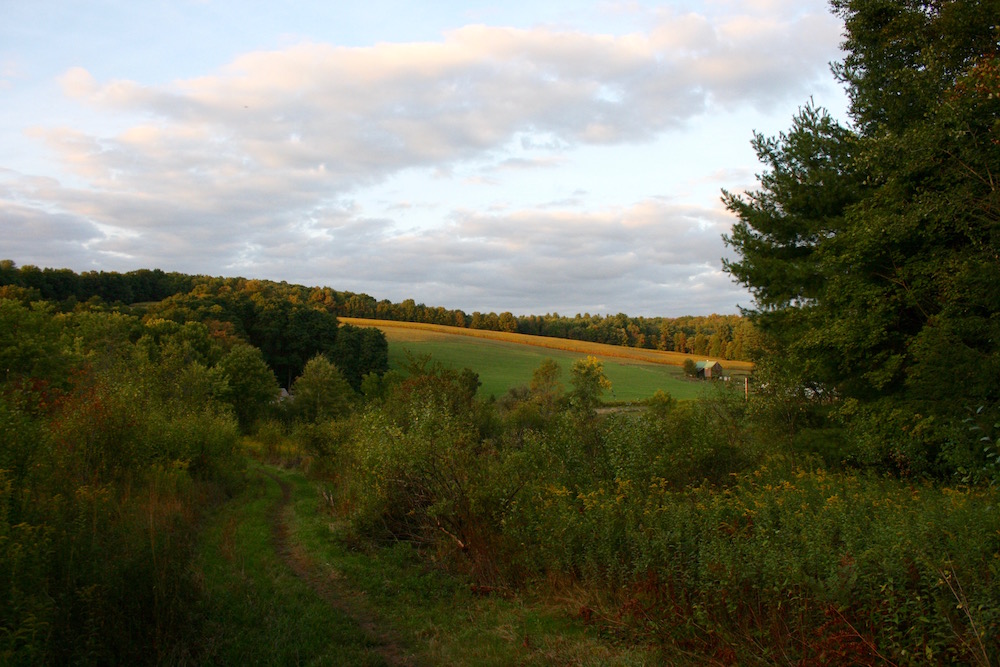 I followed Abington Trail south until the very top of the hill which winds around the eastern most border of the park. Most of this area of the park I could hear a lot of yelling and voices. Based on some Google Map sleuthing I see that there is a farm somewhat nearby this area of the park so I assume I must have been there when a party or something was going on. It seemed like they were having a ball. Good for them.

This entire backstretch is varied in the type of terrain and foliage you see. After hoofing up the incline off of Route 524, just as the trail turns south, it levels off and rolls and twists through the woods. This stretch is a really enjoyable spot to hike. There are several spots where the sunlight streaks through the tree canopy and on to the forest floor. I stumbled upon about 4 deer that were bedded down somewhere along this stretch. I was right on top of them and didn’t even realize it until they jumped up. Gave me a jolt!

The edge of the park is marked with a stone wall and, for whatever reason, I left the trail to scope out the edge and snap a photo when I happened upon some deer bones. When you walk through the woods a lot you happen upon these sorts of things all the time. You end up getting a feel for what may or may not have happened. You end up doing your own detective work to come up with your own story for what you see. I have no idea if I’m ever right but it is fun to think about. This particular story, for me, seemed like it happened at least a few months prior but not an entire year. The bones were completely clean and yet not covered. And my guess is that a human killed this animal. There is no head or jawbone that I could find. Pretty telltale sign that this wasn’t an animal that died of natural causes or at the paws of another animal. Only humans take souvenirs. 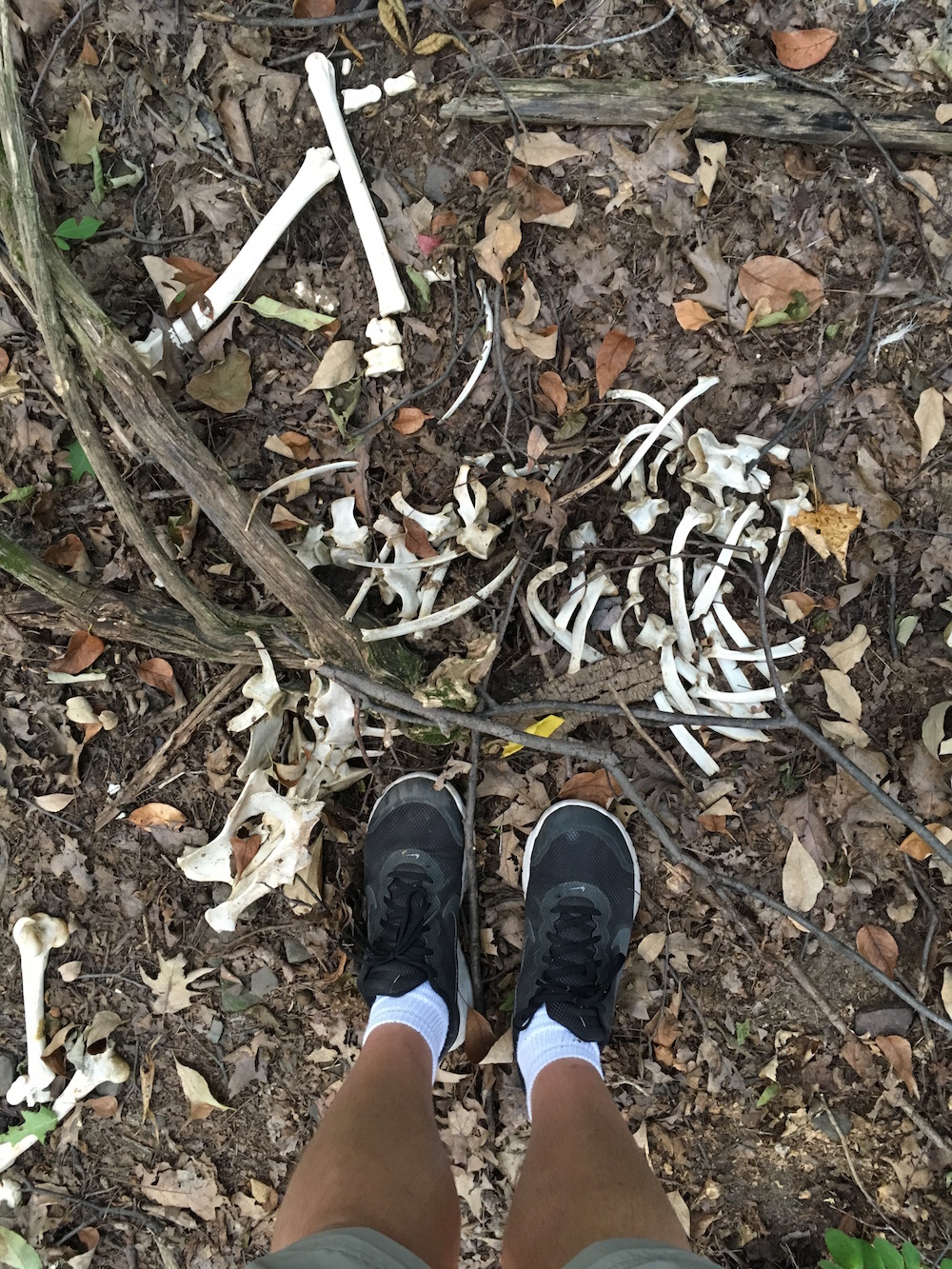 A few more steps and this area of the trail gets a little odd. The park map isn’t easily followed in this area. You won’t get lost or anything it is just that a few trails run into one another and seemingly have a few intersections that aren’t properly detailed on the map. It could be due to the fact that the most recent revision of the map was made in 2013 and perhaps some of these intersections were created afterwards.

Speaking of this park map – I would love to see an updated map. If you work at the park and are reading this and there is a more up-to-date map or a different map altogether that makes following these trails easier please send me an email about it. In an upcoming post I’ll detail my ordeal of finding my way south on North Woods Trail trying to find a small offshoot that is clearly marked on the map but simply does not exist. I’ve also seen numbers on the trail signs that do not line up with anything found on this map so I’m guessing that there are other maps out there to be had and they simply aren’t available in print-form at the park.

I didn’t cross Route 407 but rather swung northwest and followed Joey’s Trail and Turkey Hill Trail around that loop you see on the map. Like I said, an odd little area of the park. I ended up covering some of these little areas more than once on my walk which is why this hike is noted as being 6 miles for me when the actual trails are likely shorter than that.

Since I was so close to the lake, and I didn’t want to pick up this part of the trail later on, I crossed Route 407 at the Turkey Hill trailhead and walked just north of the park office to the lake. There is a cool path that leads under the road here too which I need to go back and explore more. At the lake on this small peninsula there was a man fishing as the sun was beginning to set on the water so I sat for a while and drank some water taking it all in and, frankly, warming up in the sunlight since there weren’t too many sunny spots on my walk so far. 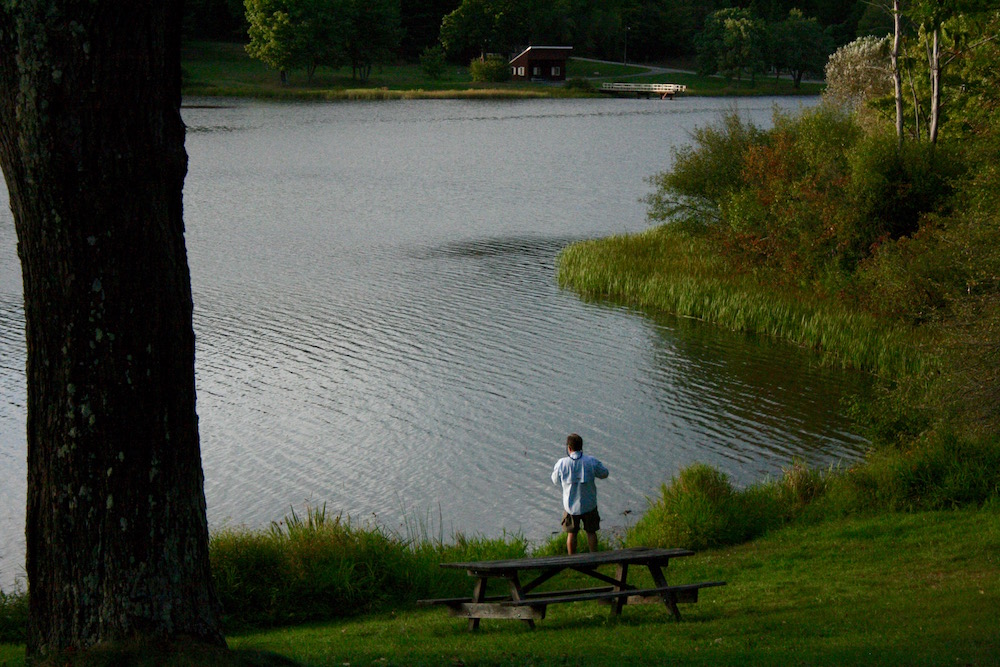 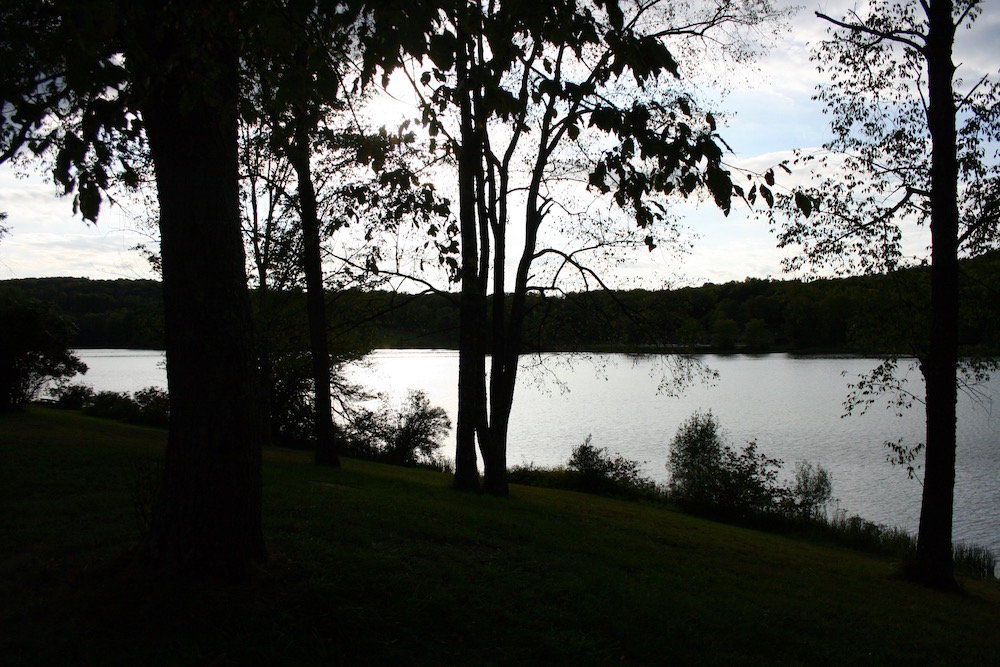 Once I was warmed up enough, and bit up by mosquitos enough, I followed the old paved road (marked as “paved path” on the map) until I hit the Ranger trailhead that my father and I first took a few hikes ago. There was a small little piece of Ranger Trail that I didn’t get that day and since I’m trying to cover every step of these trails I didn’t want to leave it out. Where my father and I turned left on Ranger Trail I turned right and crossed over Route 524 to follow Ranger Trail back to Turkey Hill Trail. If this is confusing, look for the pizza sliced shape created by Routes 524 and 407 on Ranger Trail. That’s the small piece I went and grabbed while I was here. Again I had to do a little bit of overlap to make sure I covered each piece of the trail but I’m trying to be thorough here.

I followed Ranger Trail to Turkey Hill Trail and walked north again to meet up with Abington Trail. Along this stretch of Turkey Hill Trail is a few nice rock outcrops that I should have spent more time with but the light was fading pretty quickly at this point.

When I began winding down Abington Trail on the hill there were some biker bros from “out of town” that were enjoying a good downhill ride. They stopped to ask me how they’d get from there to, I think Cole Road and by Bull Hill and back around Bullhead. But, it was getting late. I wonder if they made it or cut it short by riding Route 438 back? I’ll never know.

From here I made my way back to my car on Rowland’s Road. This was an excellent hike and one that I would only do if you can take a few hills.

Here are a few more photos from this area: 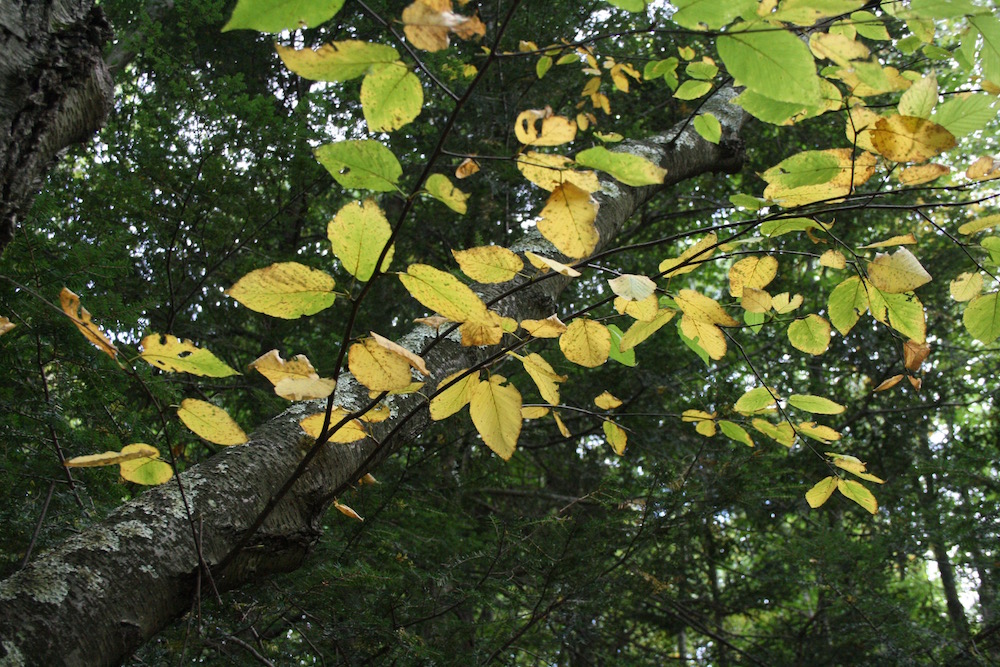 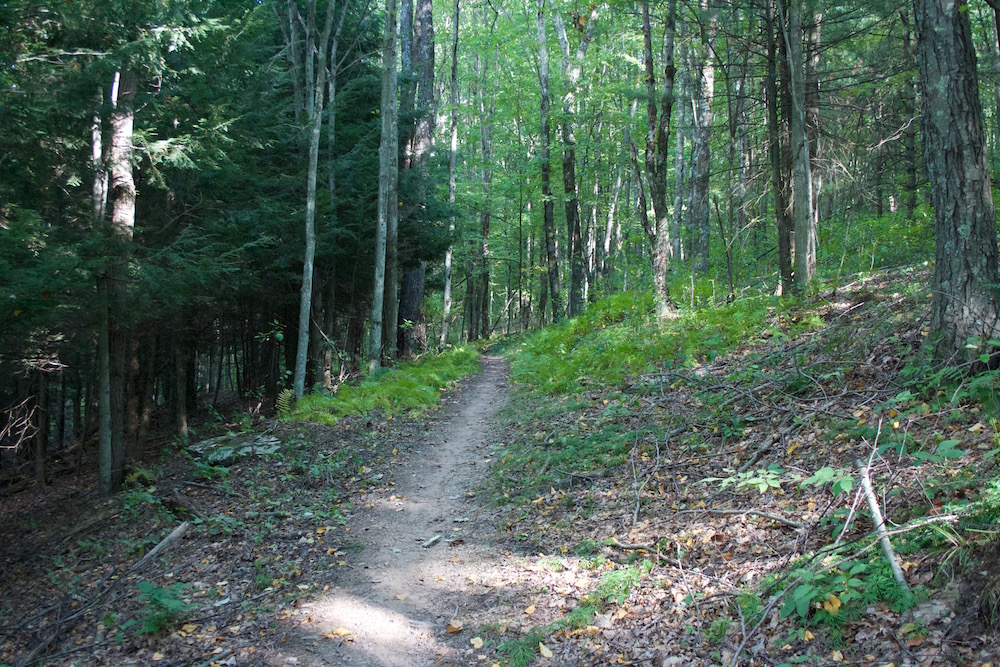 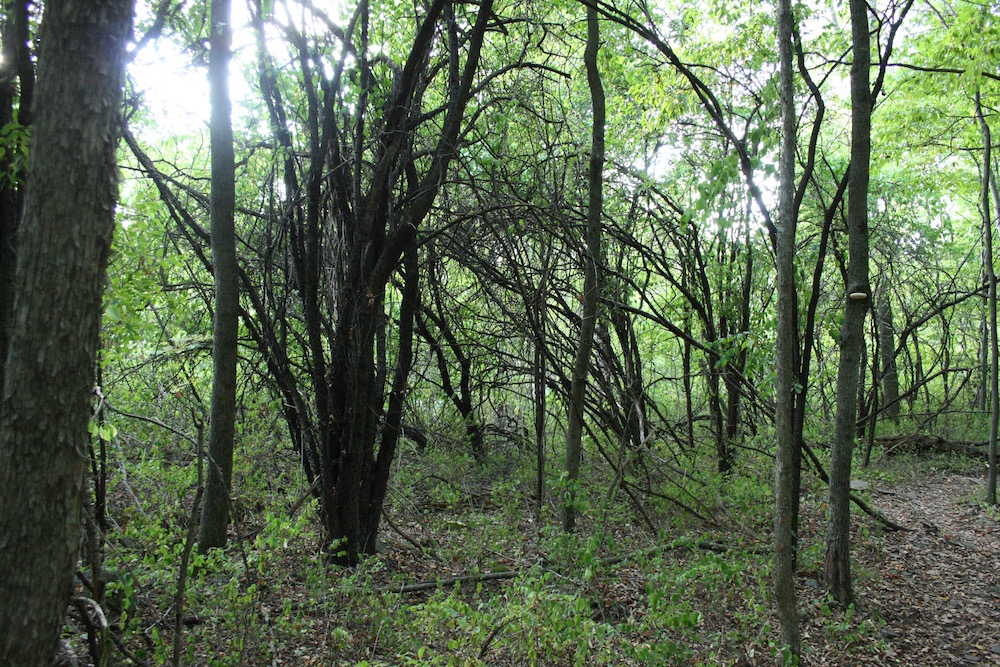 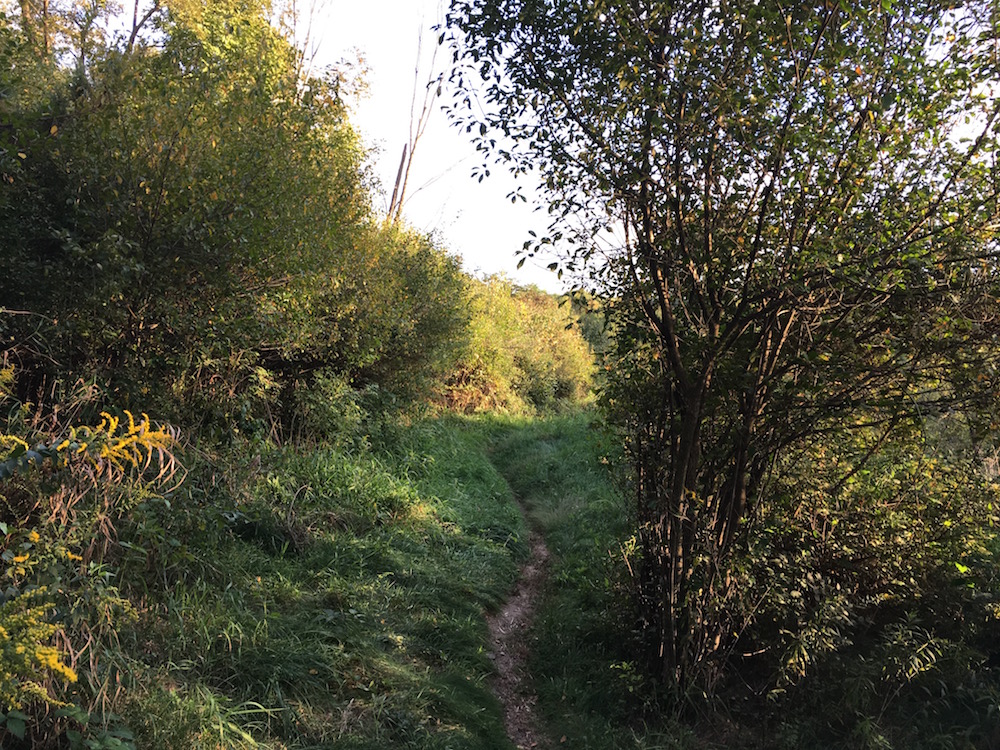 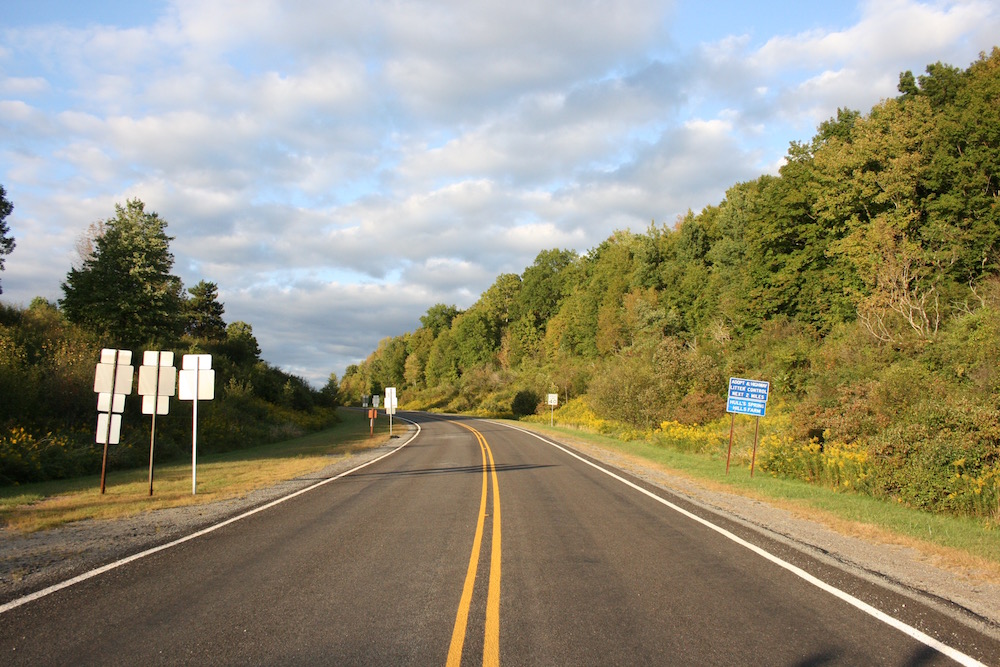 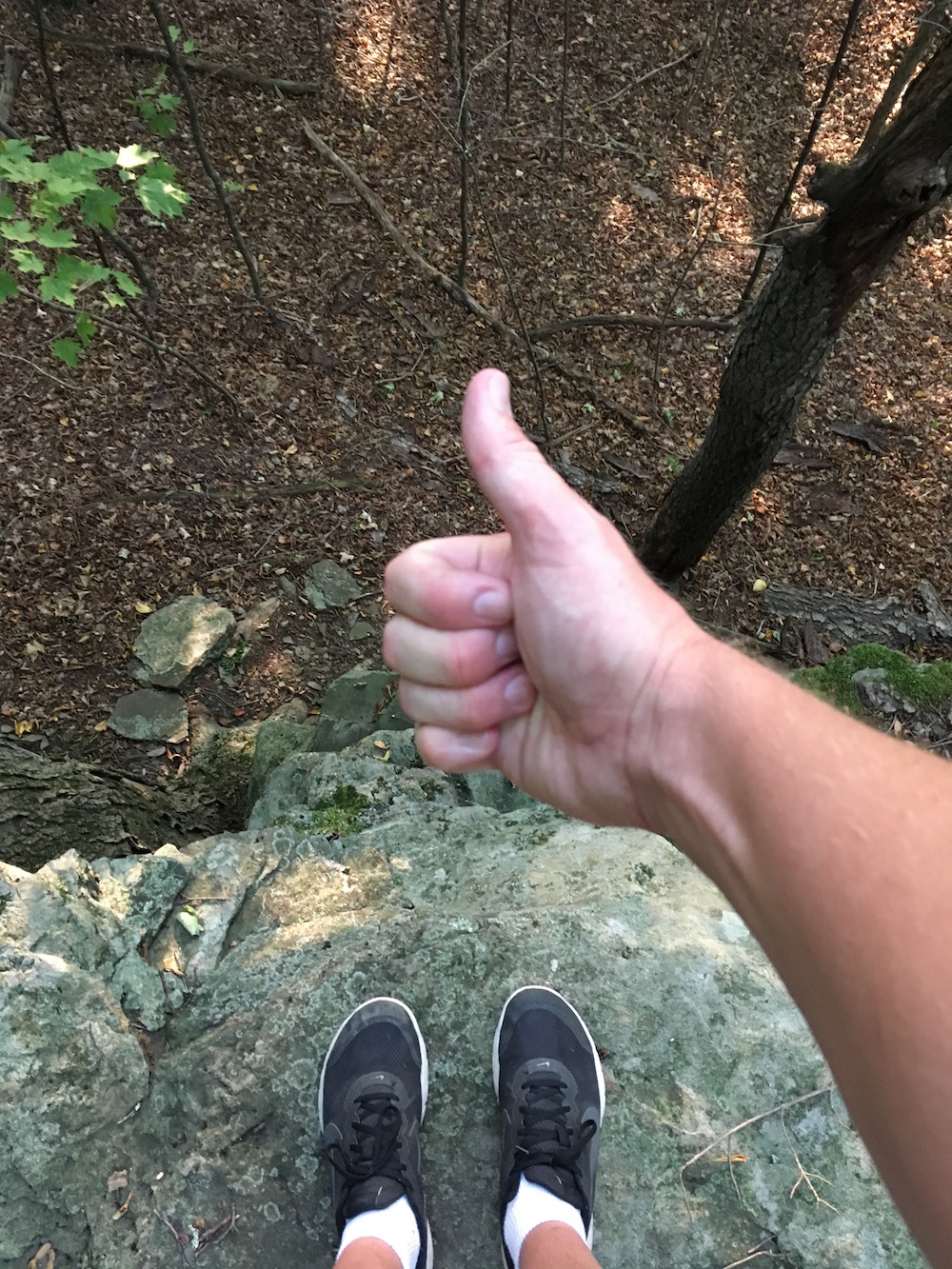 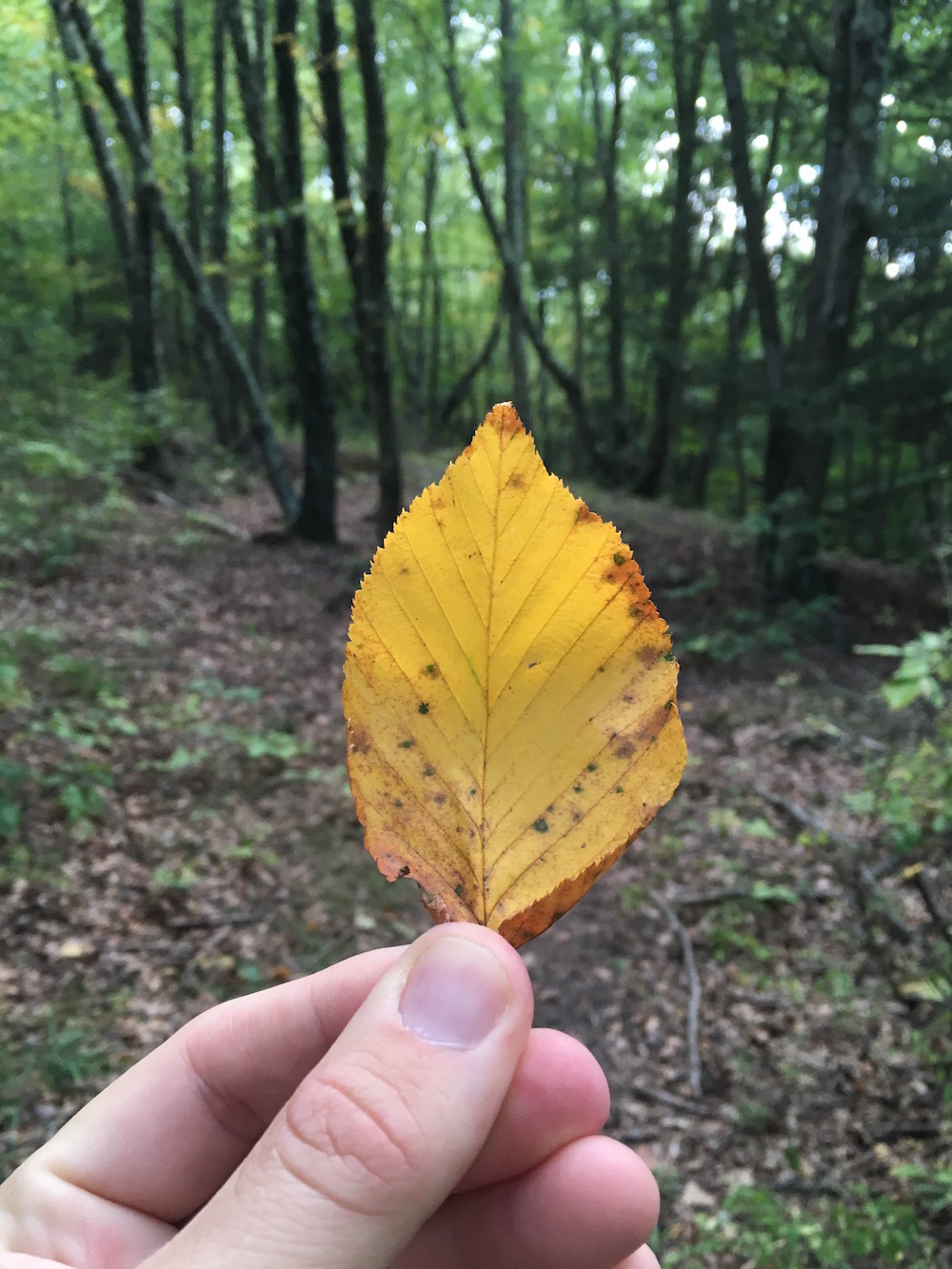 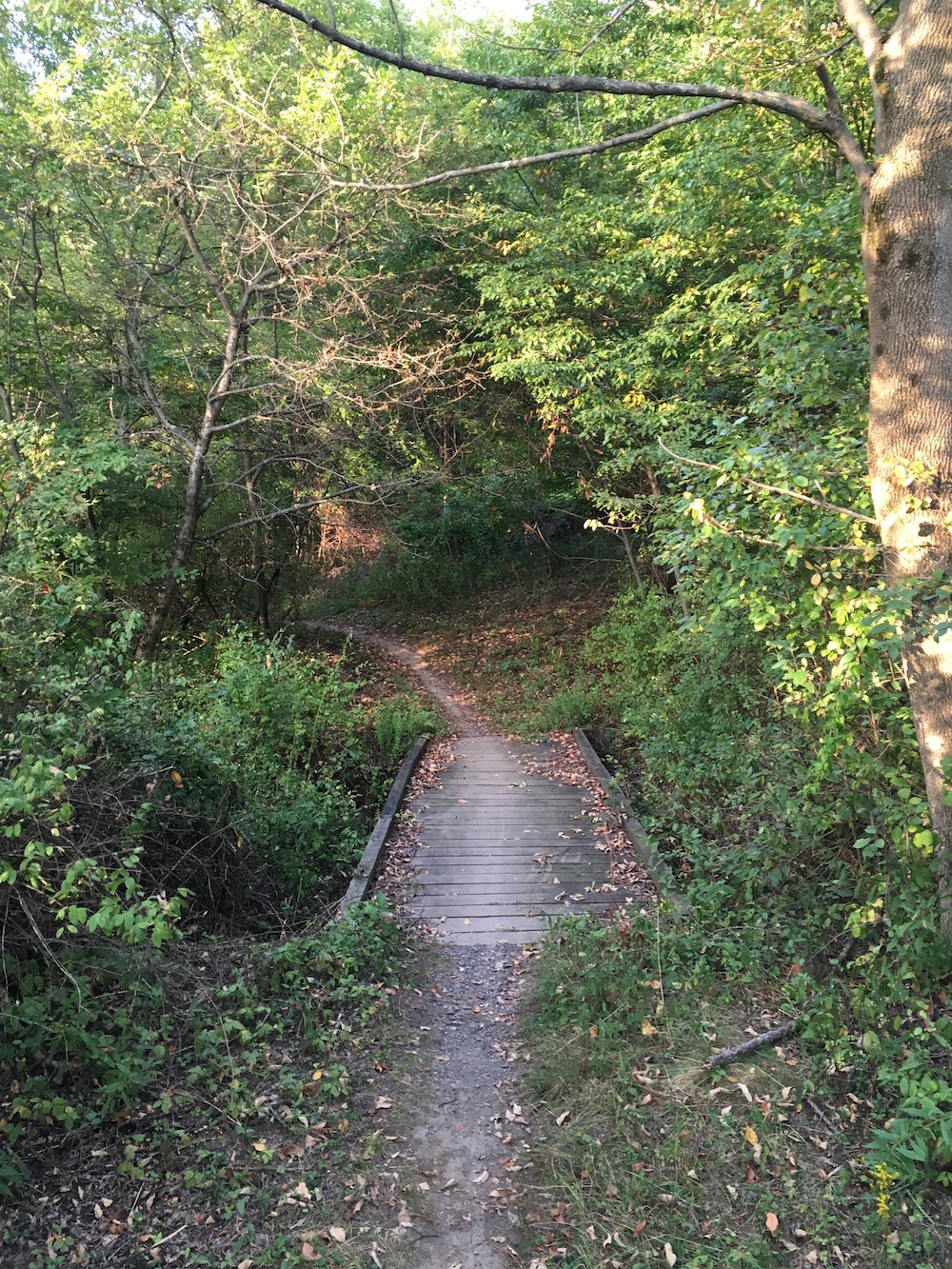 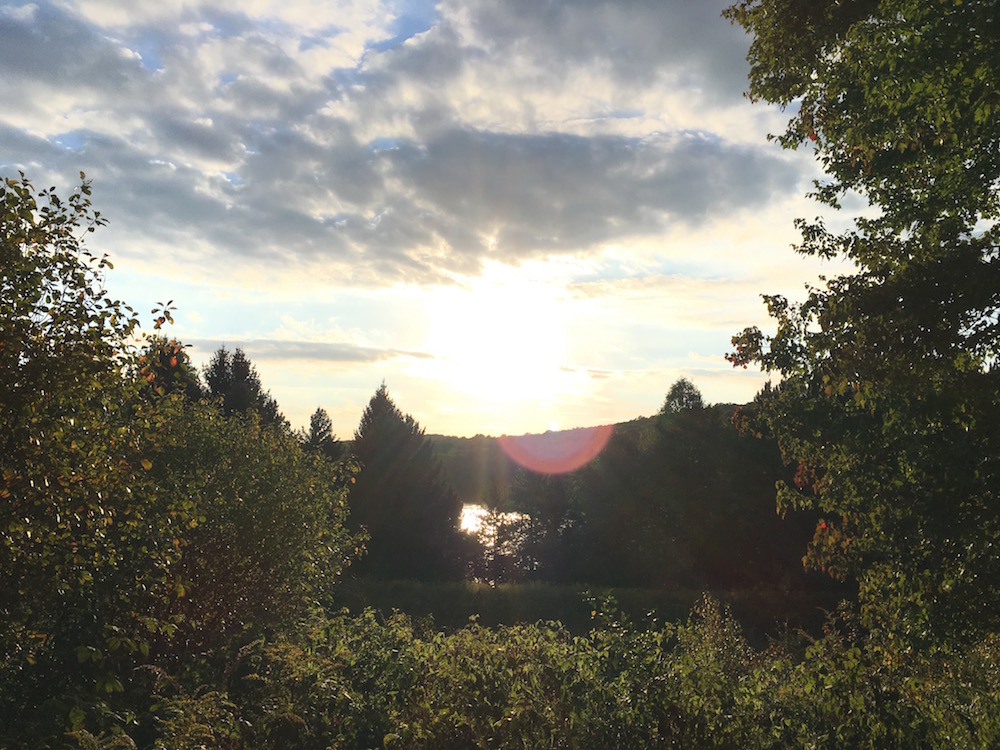 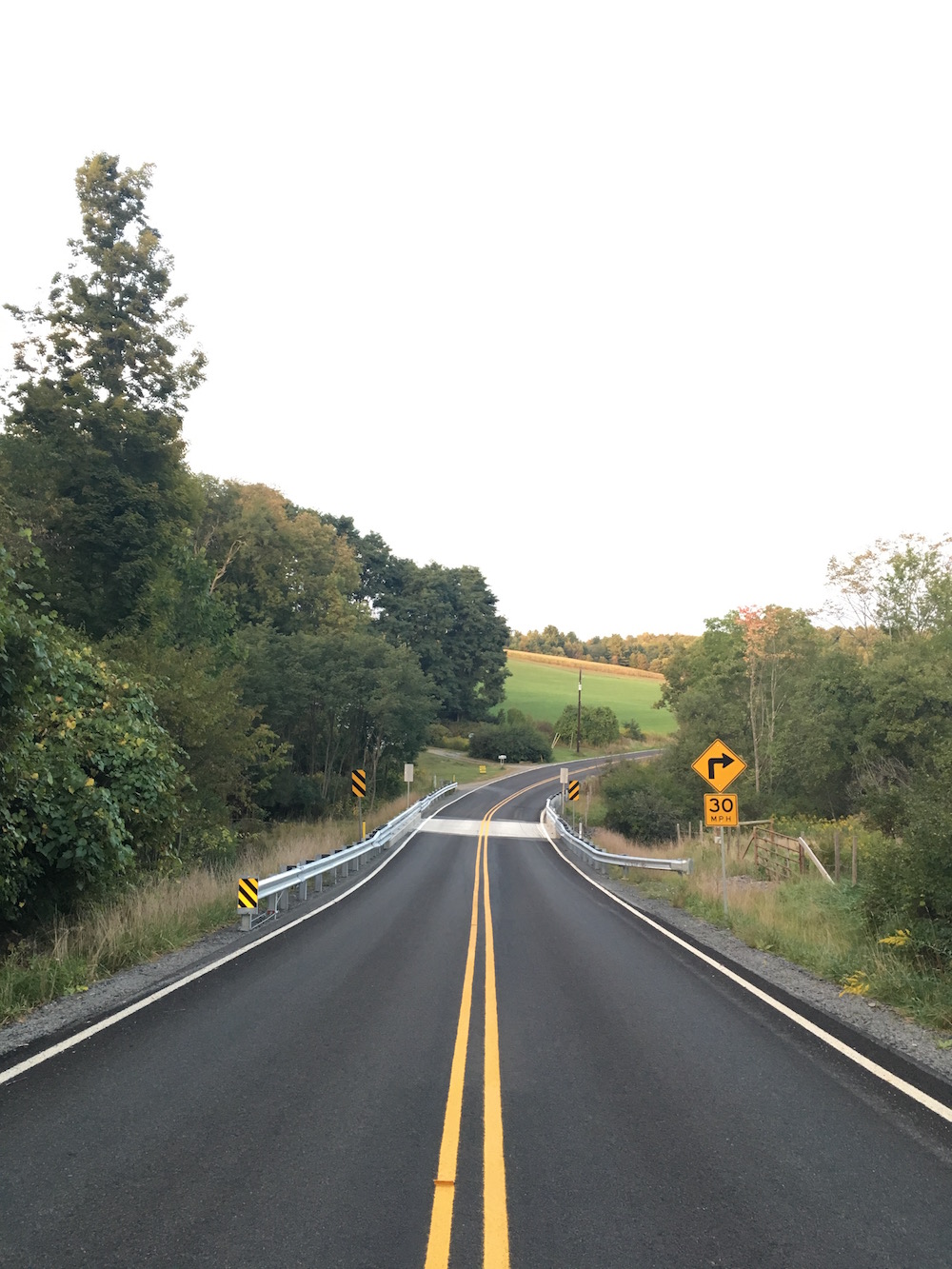 I’m so glad I’m hiking these trails but equally glad that I’m reliving the experience by looking through the photos I’ve taken and writing about it. I’ll know this park fairly well by the time I’m done.