I had been thinking and talking about buying a UAV, drone, quadcopter* (whatever you personally call them) for a long time now. Many months. When they first hit the scene they were way out of my price range. These days they are not only affordable but incredibly capable and simple to use.

Of course my focus was on a rather expensive kit with all of the bells and whistles; 4K camera, GPS, auto-return, live video feed, etc. So I was never able to justifying the cost of such a toy to myself or my spouse.

A few weeks ago now, I went to a week-long school and upon completing the course Eliza surprised me with my favorite flavor of cake and a UAV. The Syma X8G. An affordable, simple UAV that is great to learn on. She did some research and tried to find a UAV that was inexpensive but also well-reviewed. She knew I’d very likely smash it into many things (and boy have I) but she took the practical, logical approach of — try it first, see how you like it before you invest a lot into it. 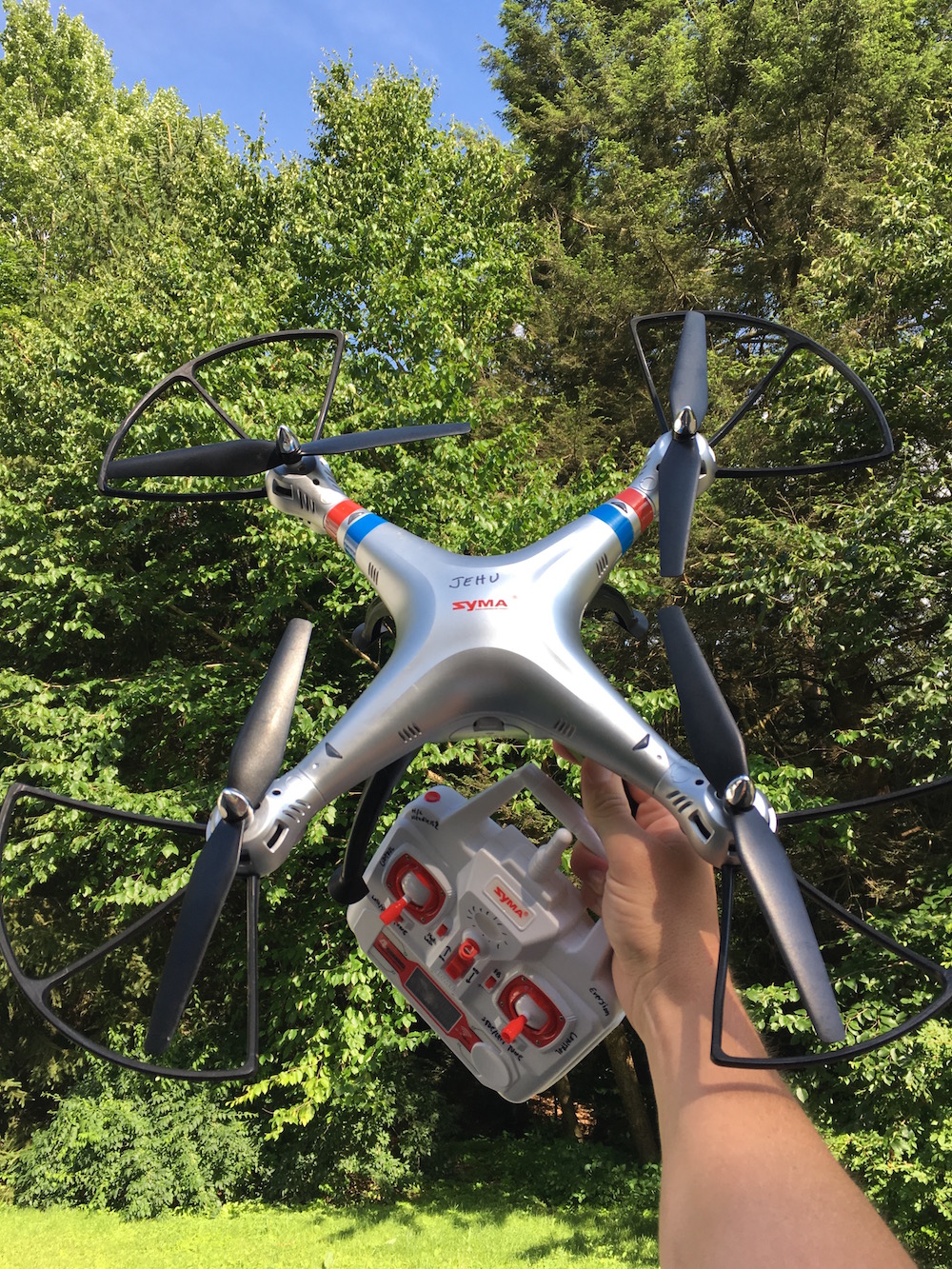 It turns out she chose really well. The reviews on the X8G are very good on Amazon but also the video reviews on YouTube are surprisingly good. People with far more capable crafts say very nice things about the X8G and what you get for the investment. Good job Eliza.

Here is what my experience has been and some of my observations after just a short period of time learning to fly a quadcopter.

The first day was crash, crash, crash, crash. I was timid, trying to fly in the wrong surroundings, and hadn’t yet fully read the instruction manual. So I wasn’t able to get more than a few feet off the ground and for only a few brief moments. 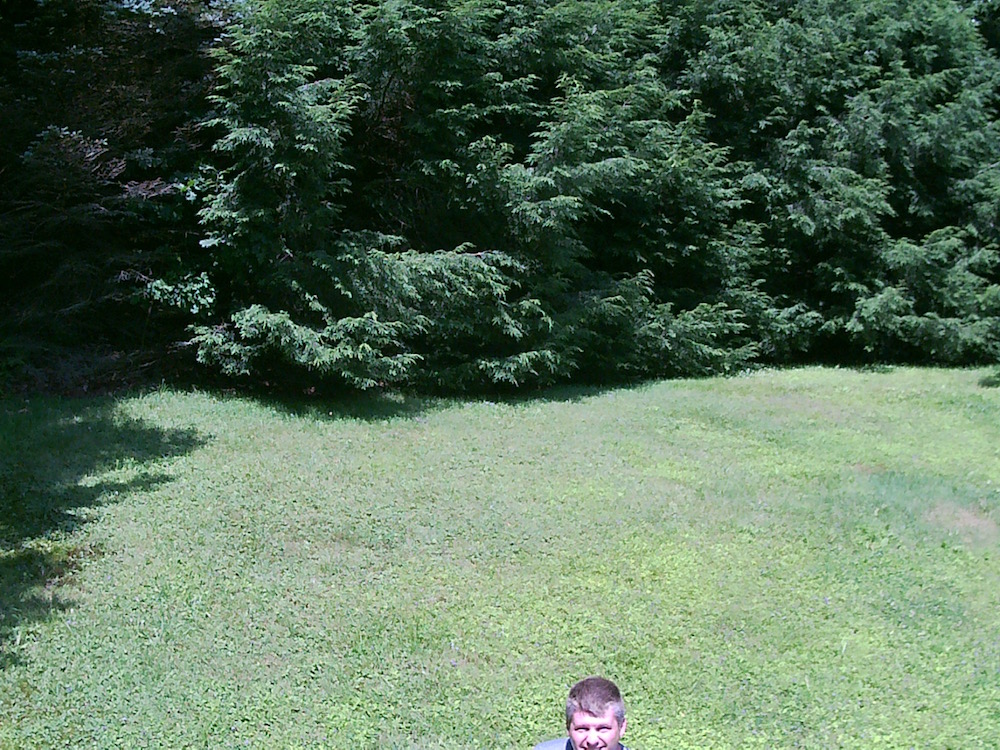 The second day was much better. I had read the manual, watched some YouTube videos, and learned about headless mode that makes it much easier to fly. Being able to get off the ground and control the UAV gave me a confidence boost. But, then, just as my confidence afforded me an incredible view of the sunrise… I misjudged how high the UAV was on the return flight and clipped a 100′ tall tree on my property.

I own 3 acres of property, much of which is covered in very, very tall trees. When the UAV is a fair distance from you depth-perception begins to wane. I thought I would clear the trees easily but ended up getting caught at the highest point in the tree. At this point I still had the blade guards on, which act as a hook in branches, and so there was really no way to get the UAV back without taking the tree down. Fortunately, it was a tree I could do without. (Thanks to Ryan for helping me.) It was a long, grueling, tiresome day. But I learned a very valuable lesson… regardless of how good you think you’re getting trees are the mortal enemy of UAV. Stay as far away from trees as possible.

By day three I was flying pretty high and pretty far. Most of my movements were reactionary rather than purposeful. Seeing how the UAV did in certain situations and trying to compensate. This stage of my learning curve can be likened to a plane pilot simply trying to stay off the ground compared to one that can bring people safely around the globe. No purpose, just survival. 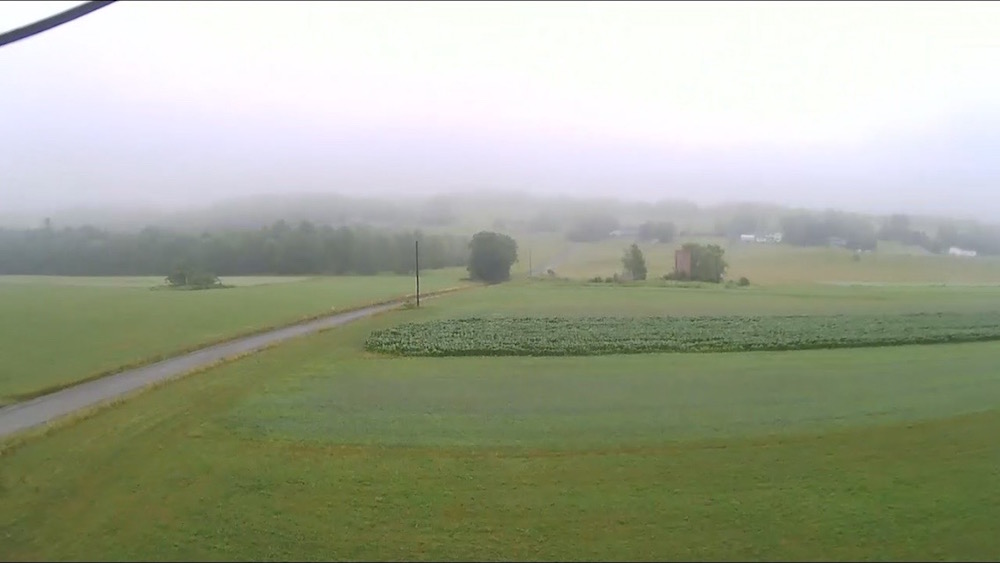 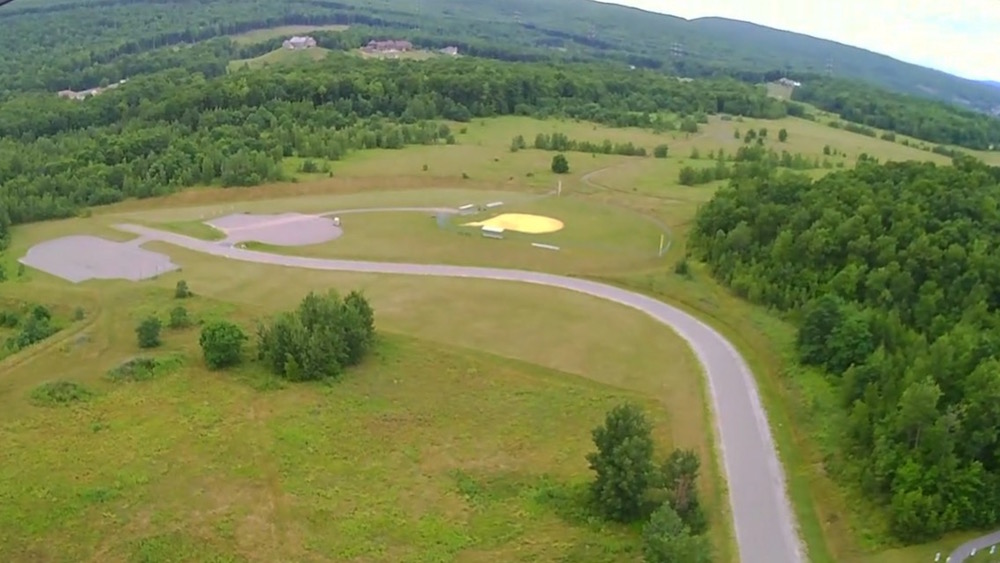 My goal with the UAV has always been about photography. Some race them. Some want to perform tricks. I want to shoot photos and video. So by day four I had decided to try to learn how to get the best results with the kit I currently have. How should I fly? Where should I fly? How should I mount the camera(s)? How can I create the best opportunity to capture good footage?

It was on that day I began to fly with some purpose. Following lines. Beginning to cut down on corrections. Picking targets. By doing this I began to improve much more quickly. 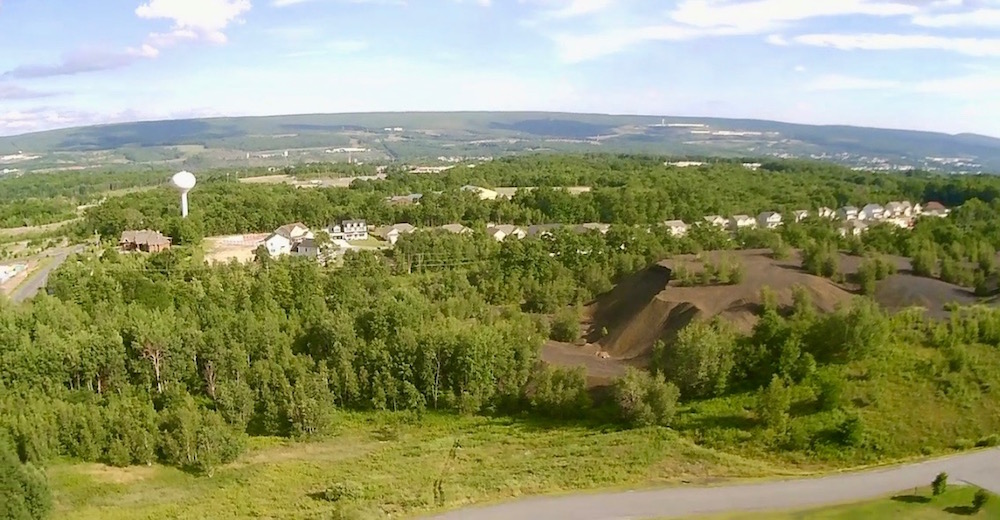 Also on day four I flew with someone else. Just being next to someone else that is flying you learn a lot. “Oh, you do that? Like this?” Subtle, simple lessons that prove invaluable. This same person created a Google+ Community for a few local fliers which has also proved useful for learning and sharing our journeys. Thanks to Justin for that.

For the next few days I began experimenting with my kit. I finally took the blade guards off which reduces wind friction and weight. This changes the way the UAV performs. It wasn’t long after that I had the courage to replace the X8G’s camera with my own few-year-old GoPro Hero 3+ Silver Edition. Dramatically improving the picture and video quality. 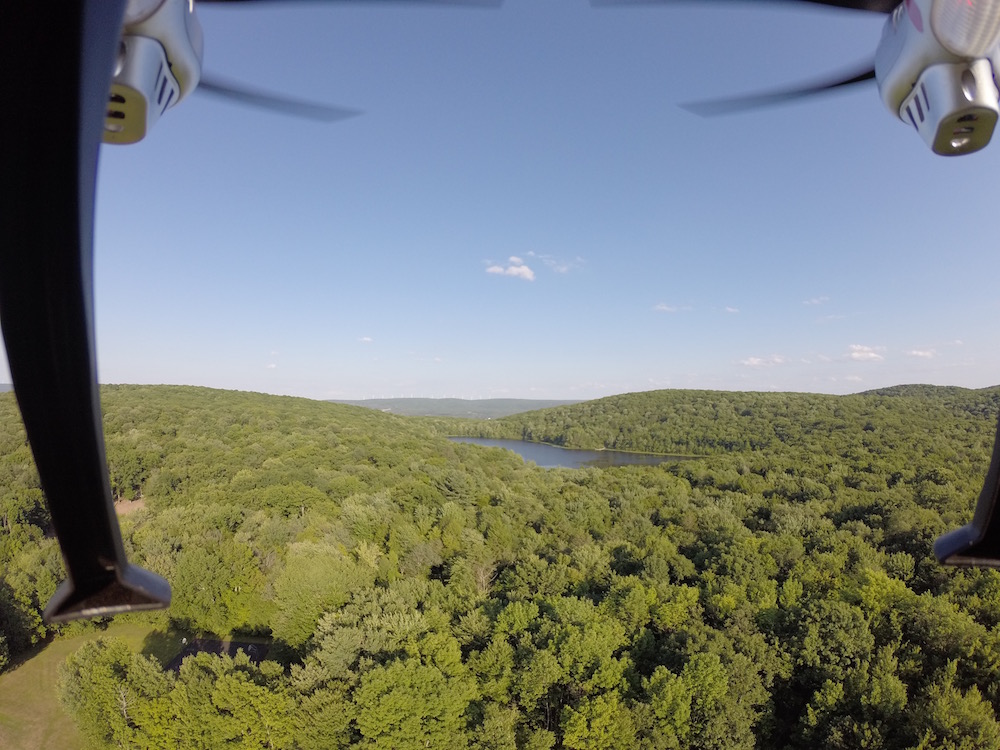 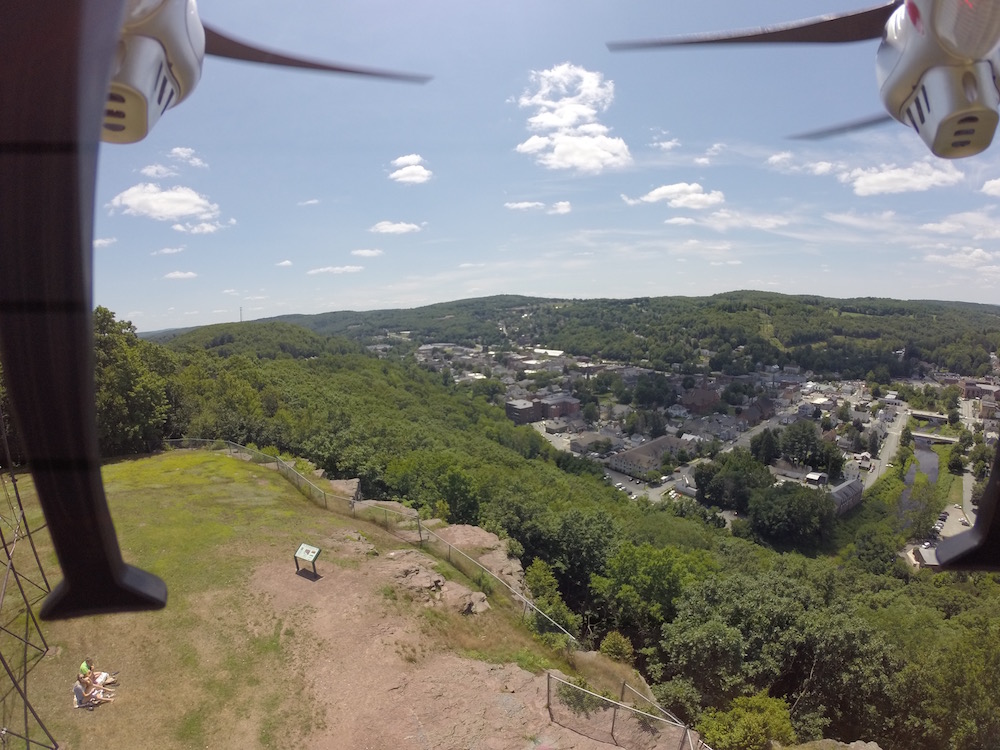 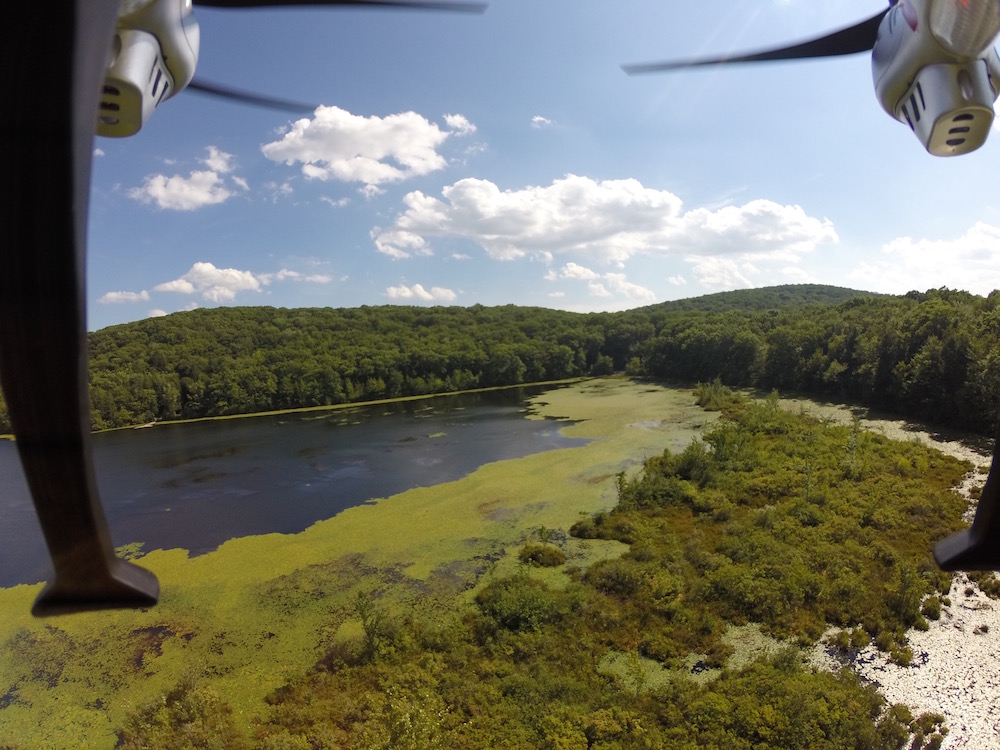 I then tried several different ways of mounting my camera to the X8G. First, I had it on bottom where the camera typically sits. Then, I mounted it on top to see if I could remove the legs from view (the GoPro’s focal length is much wider than the camera that comes with the X8G so it sees more). After a bit I got sick of the props in the videos (though, they do provide some nice context) and decided to remove the legs altogether and return the camera to the bottom.

Finally, last night, I was able to capture a full edge-to-edge video without legs or props. I still have a few small adjustments to make to this kit to get the image I really want but I’m really, really happy with the results. Also, as of last night, I took off my training wheels by switching out of headless mode and flying manual. This should provide more maneuverability and better footage once I really get the hang of it. I have a long way to go. My goal is to confidently capture scenes, objects, and vistas without ending up in the water (again) or up in a tree (again). Once I’ve done that and can consistently get a good result perhaps then I’ll invest in upgrading my kit. Until then, I’m flying this kit until it gives up on me. I highly recommend the X8G.

* The correct term, I believe, is UAV. The word “drone” suggests some form of autonomy. Even with a craft like the Phantom 4 that can nearly fly itself, it cannot give itself commands. So, the real pilots out there tend to shy away from calling their crafts drones unless they can fly themselves. However, the general population (myself included) has lumped all of these types of flying machines together as “drones” because it is easy to say and everyone knows what you mean. Why did I write this footnote? Why did you read it?