When I first found out that the entire Viddler team would be going to San Francisco for the Web 2.0 Expo – I wasn’t sure of what to expect from the Expo. Would it be a social (tshirt and jeans) or more a professional (suit and tie) type of conference? And really, it turned out to be a little bit of both.

The expo floor was filled with companies of all types ranging from large companies like Google, Yahoo, and Microsoft to smaller more fun companies like Viddler, Zimki, and Piczo. Some people were being very professional and demonstrating some very high-level enterprise applications (which are typically found behind-the-scenes of more social software. ie. Analytics and monitoring systems for server grids). Others were demonstrating their next-generation web service that can take care of all your development needs from coding, to versioning, to deployment all in a social and collaborative way. Each had their pitch, each had something very interesting to offer, and each were trying to make their product/service stand out from the pack.

The sessions that I got to see (which weren’t many since I didn’t have a session pass so I had to sneak into any of the rooms by tossing Hershey Kisses on the floor in front of the badge-checker on the way in) were much more “professional” than the panels I got to see when I was at South by Southwest this year. This isn’t to say that those panels at SXSW were not done in a professional manner, but that the sessions at the Web 2.0 Expo were much less interactive and more a demonstration of some products/services/companies that stood out as doing good work in their various fields. 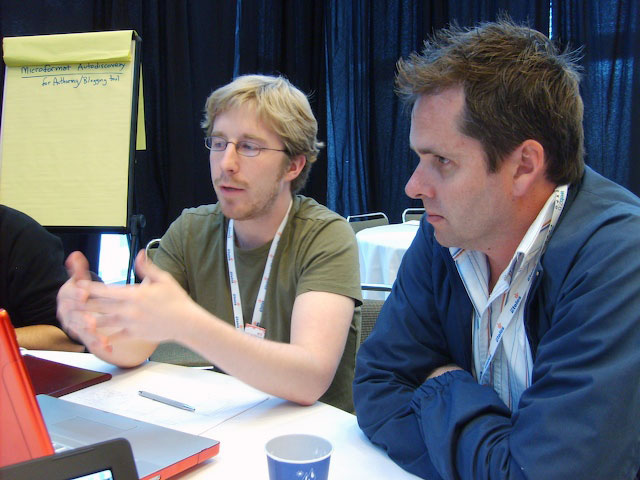 Running adjacent to the Web 2.0 Expo keynotes and sessions was Web2Open which is a *Camp style event that run in the main corridors on the second floor. Various presentations and discussions given by people that attended and participated in Web2Open were very good. “Minutes” were taken by various people and left on the walls so that if you came late to a particular discussion, you were able to quickly catch up and be part of the conversation. If you didn’t like where the discussion was going you were able to change the topic yourself by suggesting a topic, or – you could literally get up and go into another room where maybe the topic suited you a little better.

The idea of doing Open conferences like this is still very much in beta – and the process is being refined by the attendees each and every time one of these events goes on – but they are definitely much more attractive than any other event that I’ve been to. Simply being able to steer the conversation by simply raising your hand and asking a question lends itself very well to building value for those that attend.

The Viddler team and version 2.0

Viddler had a massive push to finish Q&A and testing on the its latest version of the site and player and managed to fit in many hours of development in order to release version 2.0. There are still a few bugs being worked out as soon as the developers and managers get back home from this trip – but overall the release was a big success and was fairly well received. The roadmap for Viddler is still quite exciting and the entire team is looking forward to the next step. I’ll have some more information about this and will be asking for everyone’s feedback on some of our ideas shortly. 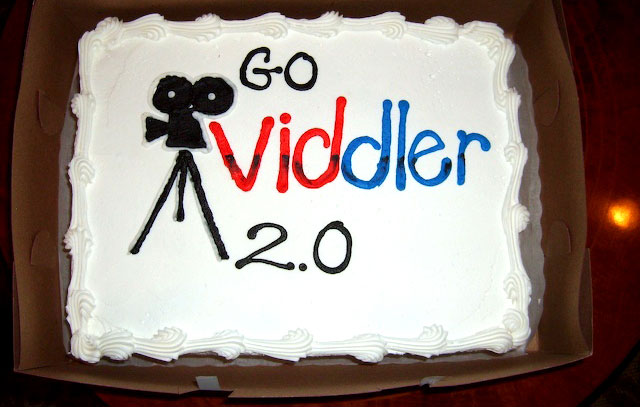 We celebrated version 2.0 a little bit early with some champagne and cake. The entire team was staying in Saratoga at our President’s relative’s house. We were so well taken care of that none of us wanted to leave (freshly squeezed orange juice right off the tree every morning makes a man wanna stick around).

Meeting the entire team for the first time was awesome. Working remotely with our team is really great and is actually conducive to getting very good work accomplished without the added expense and overhead of having everyone move to one location and setting up the proper digs for such an effort. However, it was nice to finally spend some time together to get to know each other even better and fit a real personality to the people that I have the privilege of working with everyday.

Harry and I got to work on our commercial together, which has caused a little bit of a stir with some members – which is always good to know that our users are reading our terms of use. We’re looking forward to updating our terms of use to fit more inline with what we really want to be able to do — promote really good video content and display it in an interactive and valuable way.

The moment I got a feel for who was going to be at the Web 2 Expo; namely my friends from Citizen Agency, Ma.gnolia, etc. – I decided I really wanted to have a party with a few companies to help fit the bill to really pull off something nice. I mentioned this to Larry Halff and Chris Messina and I must say – they really took the ball and ran with it especially considering my inexperience in putting something like this together combined with the fact that I’m on the east coast far away from finding out about all of the venues that were available.

Tara (unknown last name) (aka Tara 2.0) came through in a very big way and secured our venue and setup everything we needed go pull off a successful event. Having an “event planner” is really key when you are trying to do one of these events with multiple companies and tons of logistics involved. If you are thinking of doing something like we did – I definitely recommend assigning one experienced person to get everything setup properly. 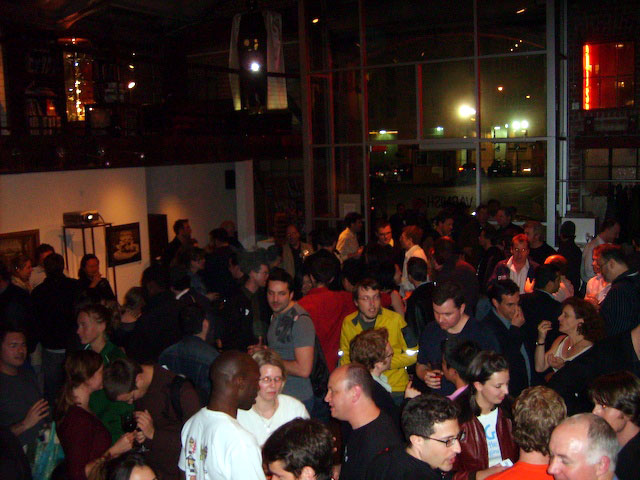 The party, in my opinion, was a huge success and it seemed like everyone had a really great time. People were lined up outside to get in, we were “at capacity” for the entire duration of the party, and people had to be escorted out of the gallery when the place closed. I had been to a few events at South by Southwest where people leaved early, the bar tab ran out quickly, or where generally not many people showed up. Such was not the scene for the Web 2 Party and we had a great time meeting everyone who came, shooting some video, and had some great discussions.

We’ve been talking about doing something in New York in the Fall so be sure to keep your ear to the ground. We don’t want to let all the west coast peeps have all the fun!

I know I’m speaking for the entire Viddler team when I say that w
e’d like to thank Citizen Agency for helping to coordinate the entire event, and thanks to Ma.gnolia, Scrapblog, JanRain, faberNovel, Facebook, Plasq, and WineLibraryTVfor helping us in throwing the best party during the Web 2.0 Expo. We hope you had as much fun as we all did.

Here is just a small collection of photos that I took over the course of the week. I didn’t have a lot of time to shoot many photos as I always seemed to be busy recording video, talking at our booth, chatting with friends or just generally preoccupied with other things. I recommend you look at the Viddler Group on Flickr for more photos (oh, if you have photos please put them in the Viddler group) and also watch the Viddler tag on Viddler to see any video that may pop up over the next few days from the Expo. 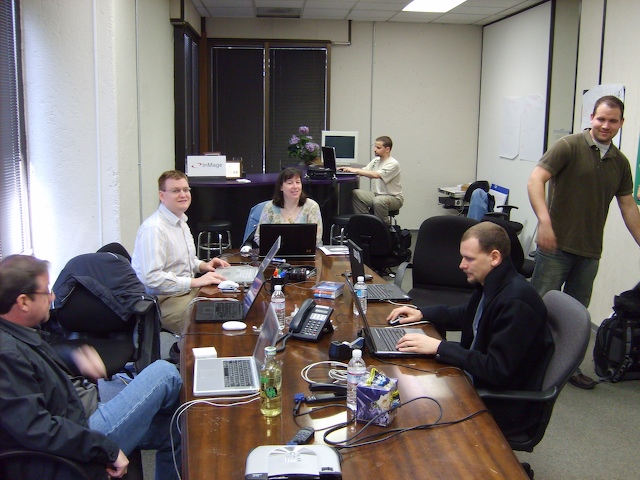 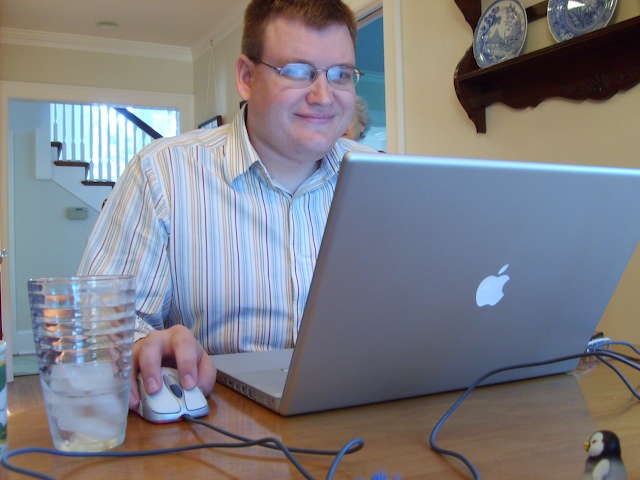 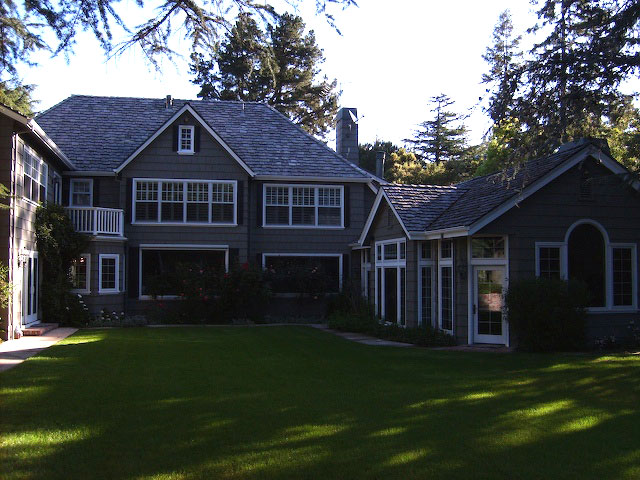 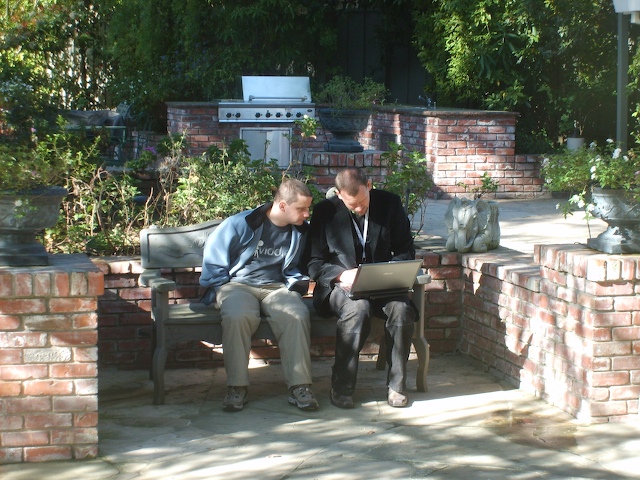 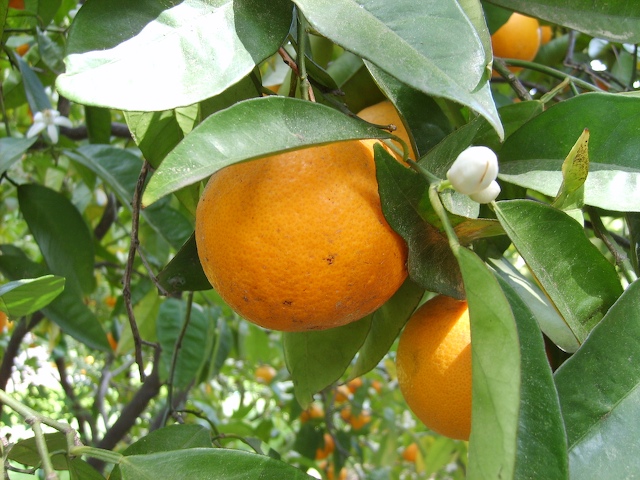 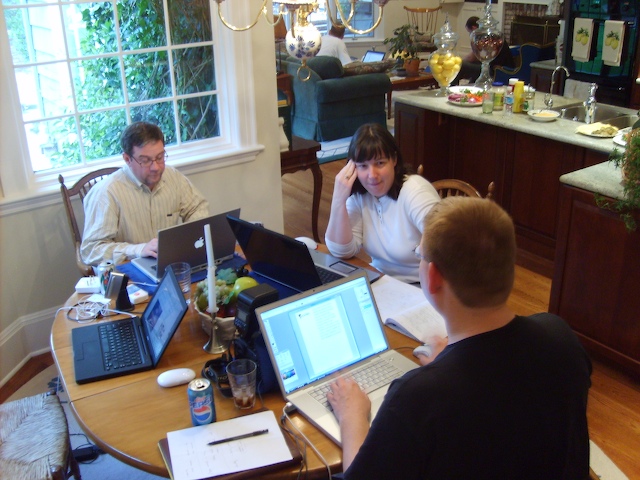 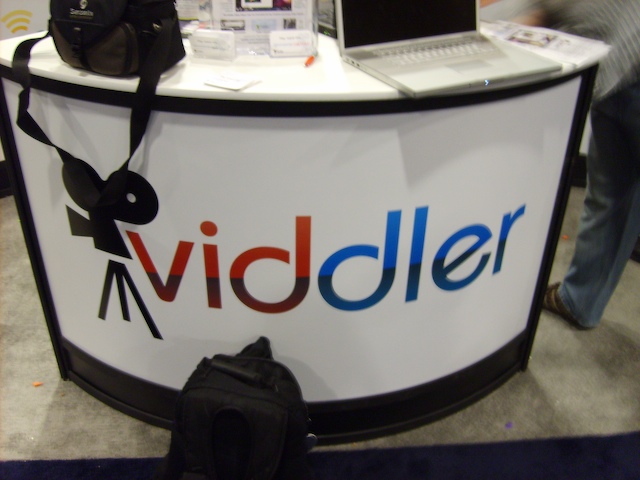 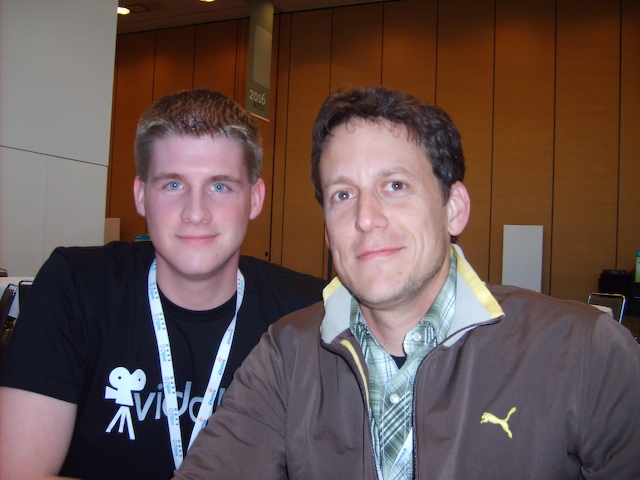 Blake Burris and I 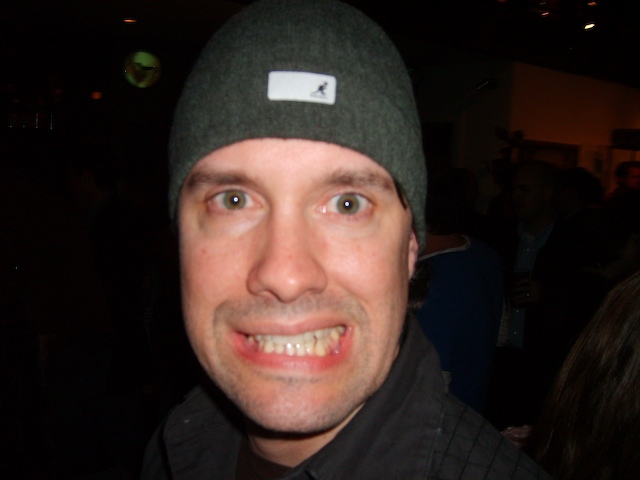 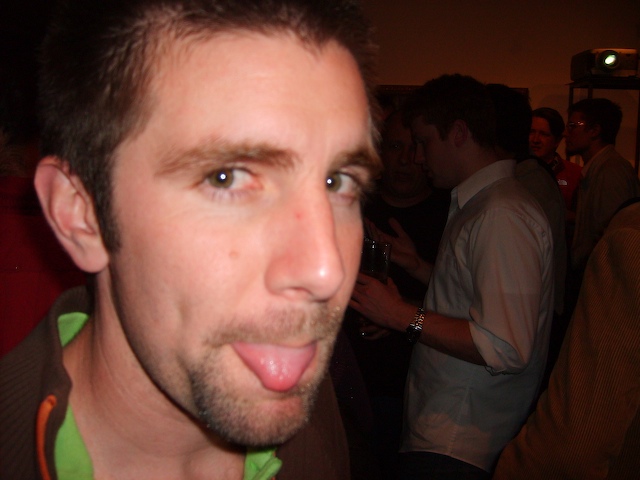 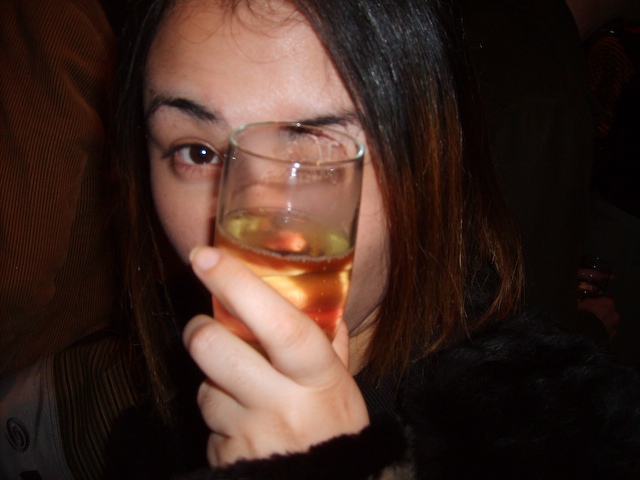 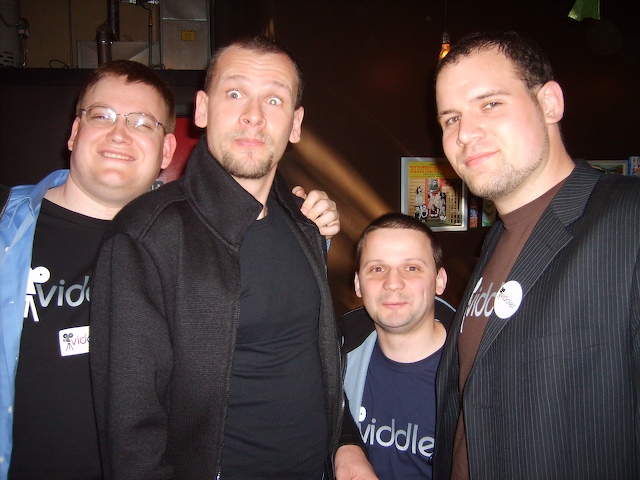 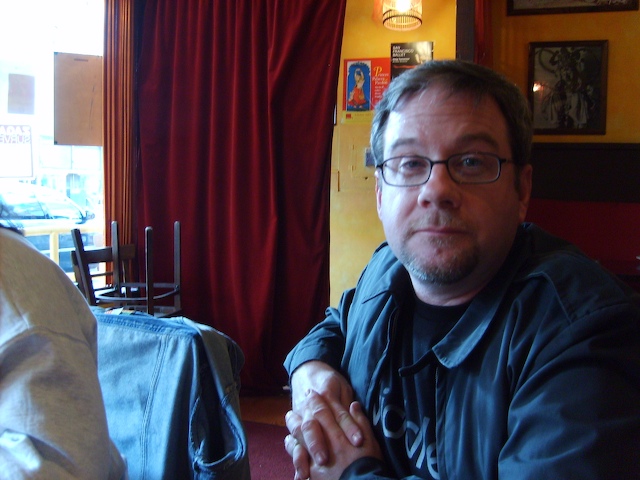 Again I wish that I had more time to take more photos than I did but I’m thankful that friends like Chris Tingom were able to take a bunch of photos during our trip.