Hiked in September 2016 – Approx. 5 miles – For this hike I parked in the second parking area on Lake View Drive and began walking northwest into the campgrounds. Looking at the map it is just above the word “Pine”. 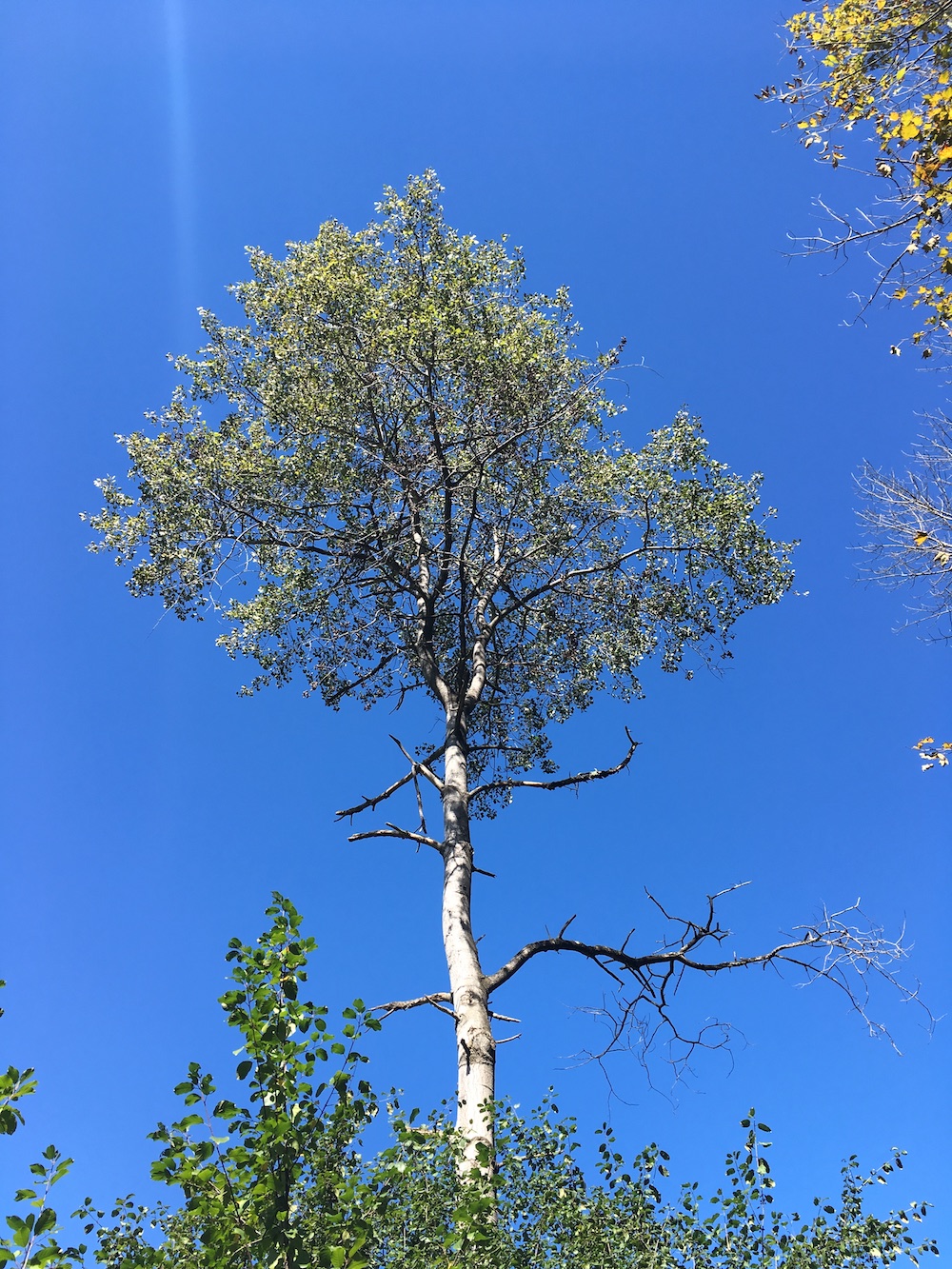 This area of the park that I’m hiking today changes elevation many times throughout the hike. Never so drastic that I couldn’t recommend the hike to just about anyone, but steep enough and often enough that I would plan on needing breaks. This is the only area of the park where you’re close to facilities nearly the entire time if that is a important for you.

I took the paved road towards campsites 1, 2, and 3 on the map. Walking through this area immediately gave me the desire to run back to my Jeep and grab my tent and camp out. It was a beautiful fall day, the sun was shining, and I could smell other camper’s fires. There weren’t too many people on these sites. One of the sites was occupied but no one was currently there. I think it was a bunch of first time campers too. If you’ve done much camping you can always spot the newbies. Nothing in the camp is “square”, the tents are in spots where you think water would puddle, tons of stuff (like food that comes in wrappers) that shouldn’t be left out overnight are all over the camp, and most of the gear looked both inexpensive and brand-new. It is fine to be a newbie. You have to start out sometime. As I walked passed their campsite I just thought to myself; welcome to camping, I hope you love it. Maybe the next time I see their campsite it will be neat, tidy, and full of great cast iron pans cooking freshly caught fish.

I continued on the trail between campsite 2 and the roads north. There are not a lot of markings on the map in this area so it is difficult to describe to you here exactly which way I went. These camping areas all have names so I assume there is a different campground map available. But I followed the paved roads through the campground until I got to the small loop you see that begins the path to Woodland Ponds Trail which leads to Big Bass Pond and Bull Frog Pond. 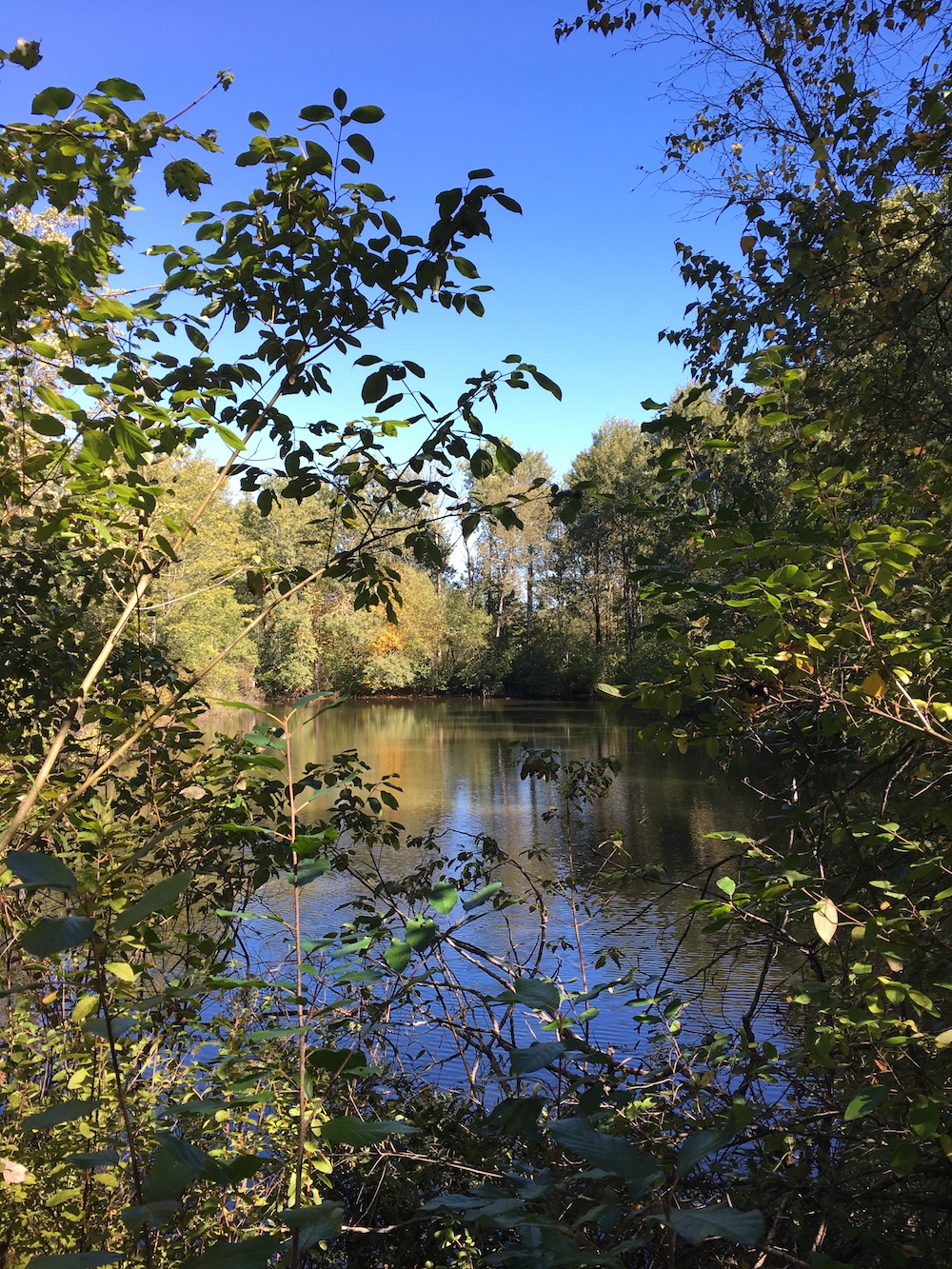 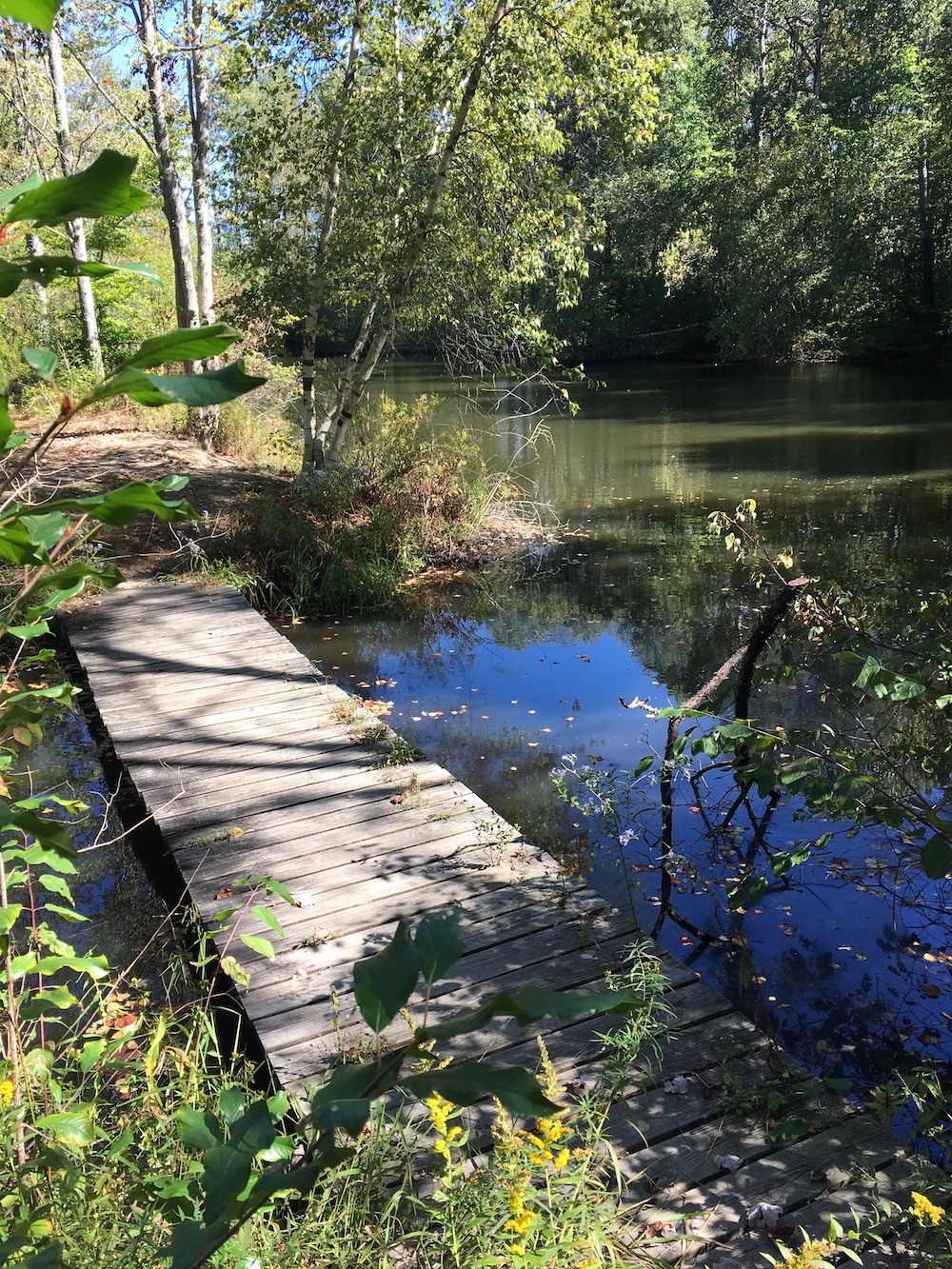 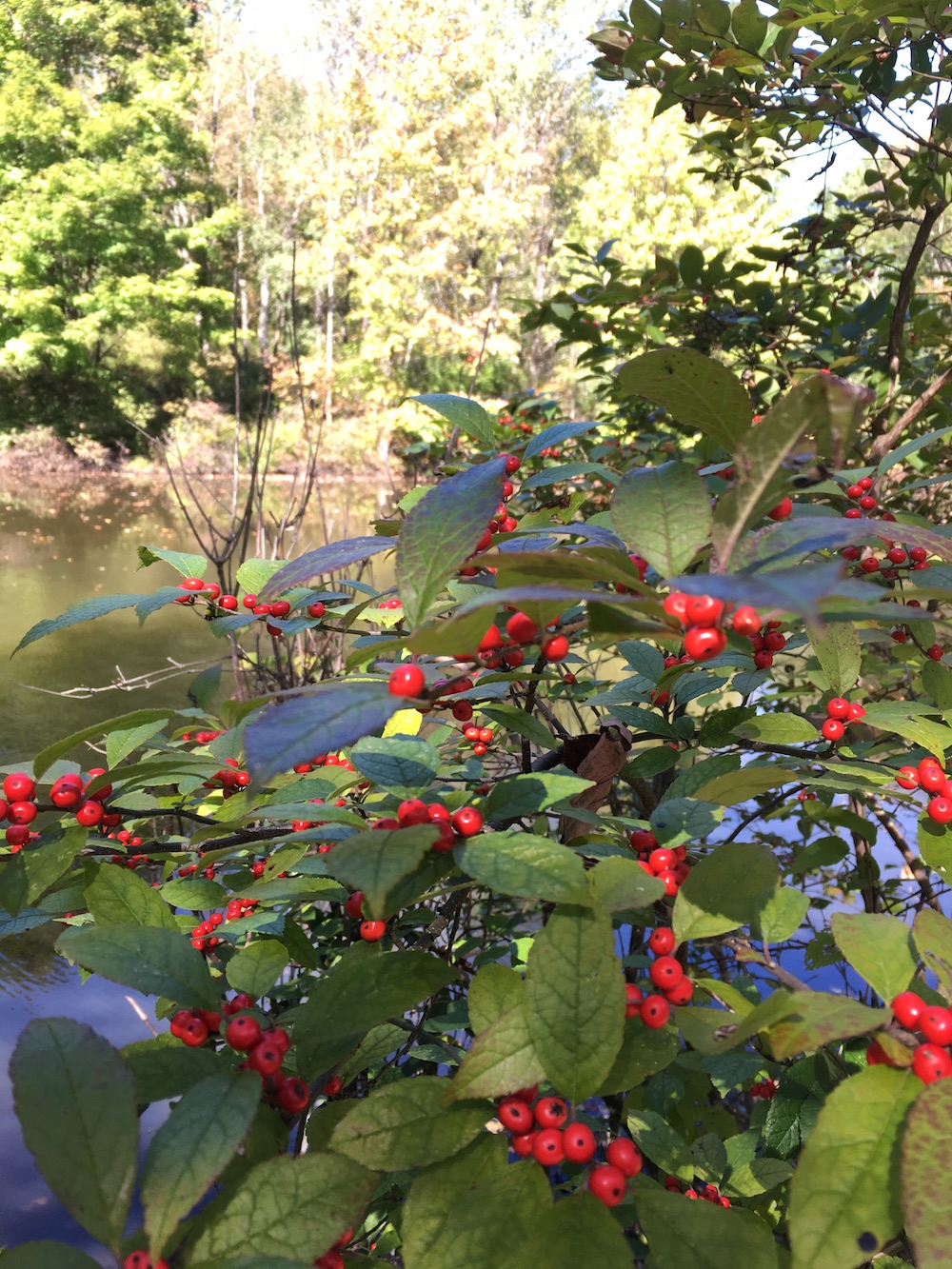 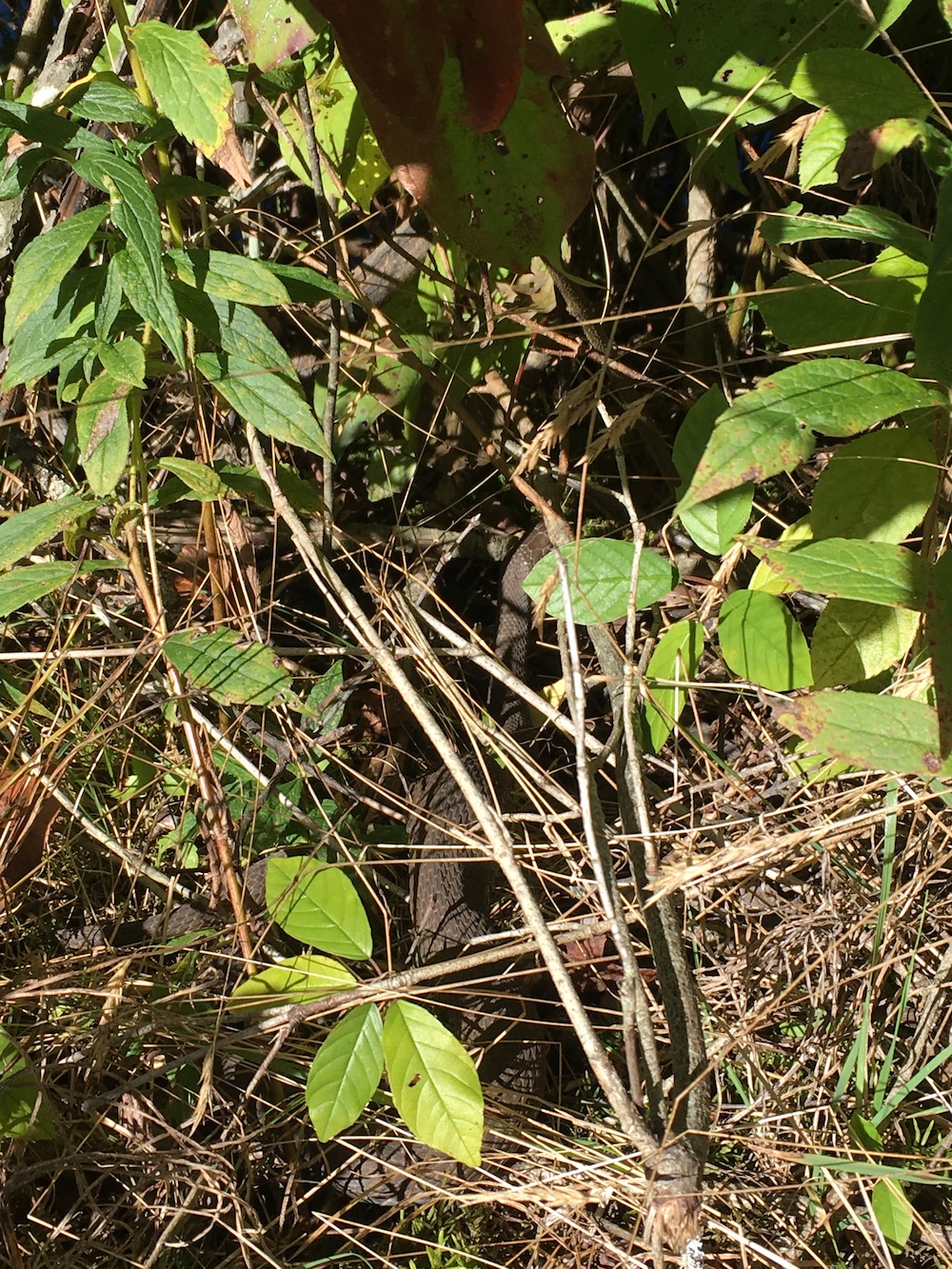 I spent a fair amount of time at Big Bass Pond. There is a small bridge and island here and I ended up seeing a lot of frogs and water snakes sunning themselves. I love snakes. On a cool fall day I’d bet they were trying to soak up whatever warmth was going to be left in this season. The water snake’s eyes were all getting pretty cloudy. Perhaps one more molt before they need to find a place to hide out for the winter. 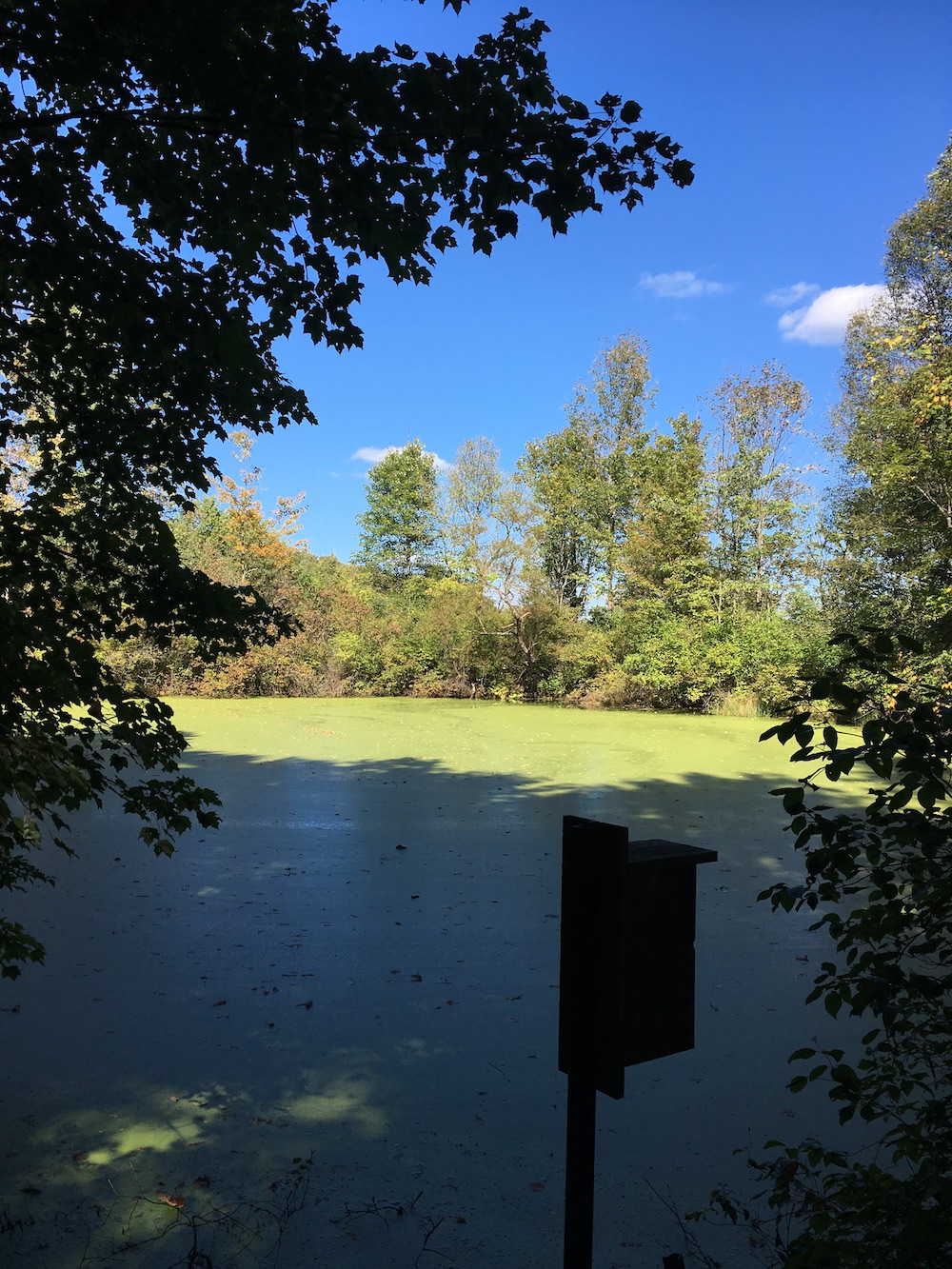 Bull Frog Pond was covered in plant life making the entire pond bright green. I should have walked around and found a less shady area to take a photo to show the green but I didn’t think of it at the time. I was just enjoying it. I saw no bull frogs. They were likely on the sunny side of the pond.

From Bull Frog pond I swung south down the North Woods Trail which I had covered on a previous hike. I saw no real way around it but I didn’t mind.

I don’t mind, really, since no matter what trail I’m on I’m just happy to be hiking. But if I was ever trying to find my way somewhere it’d be nice to have an updated map. 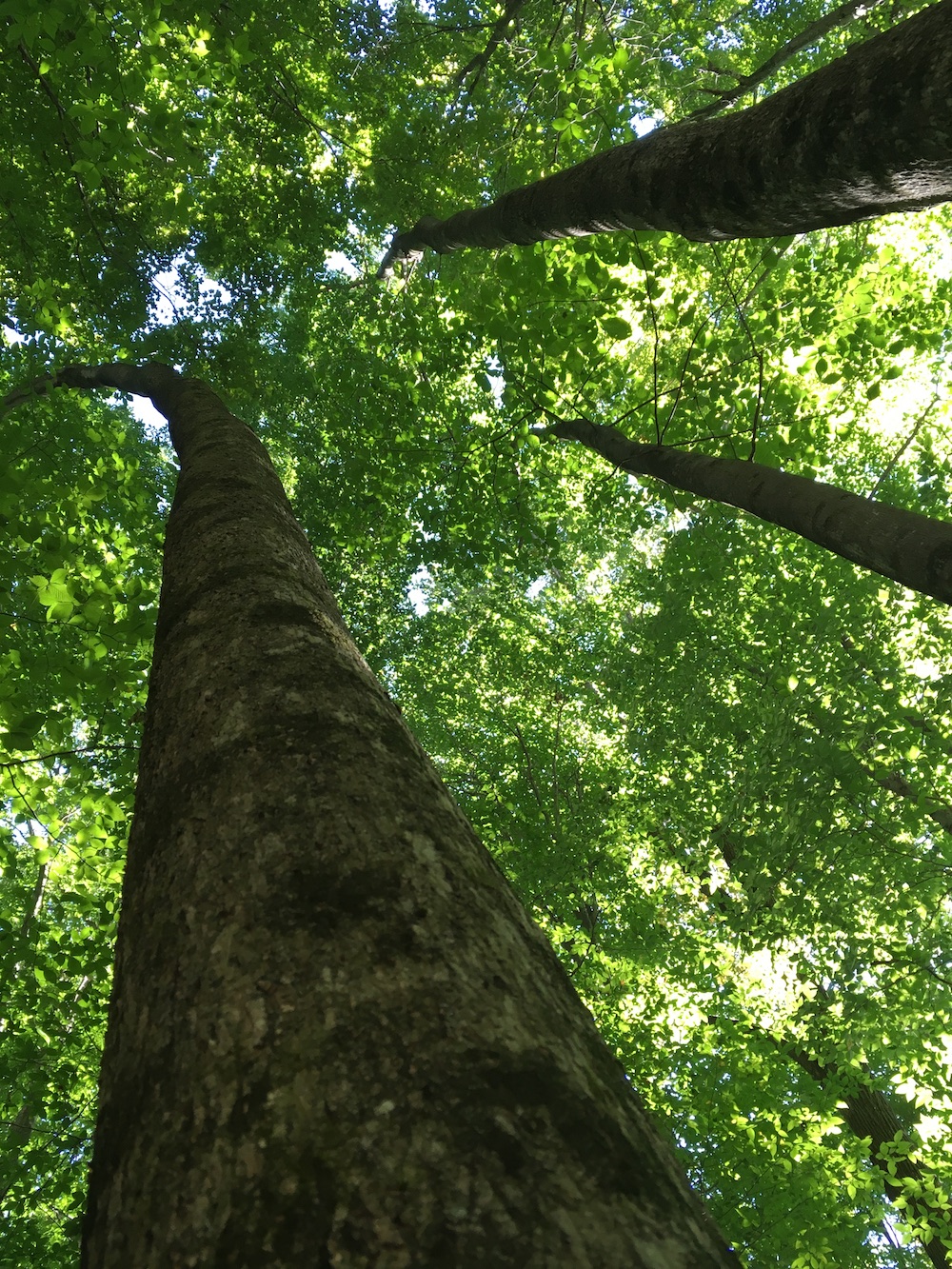 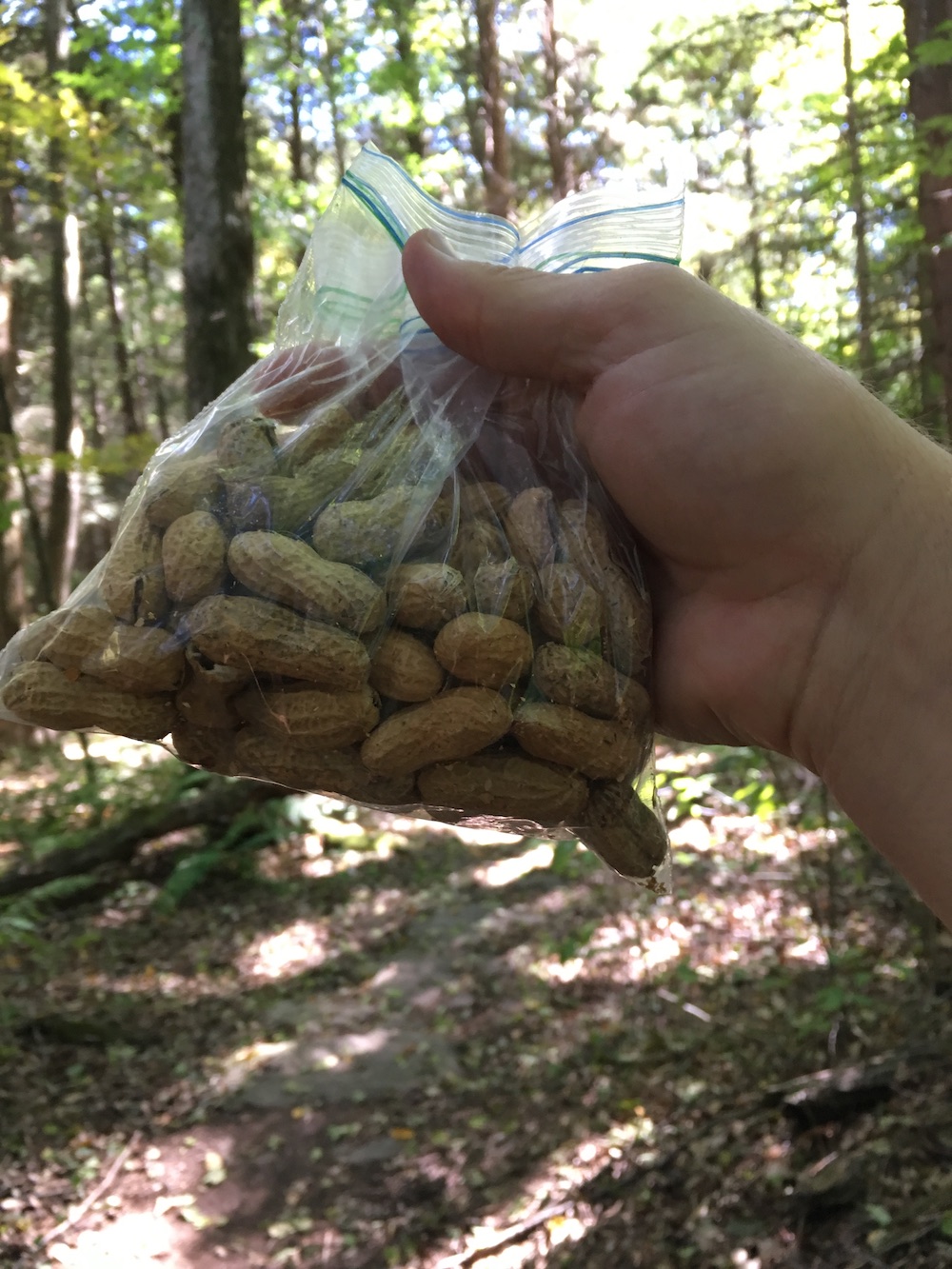 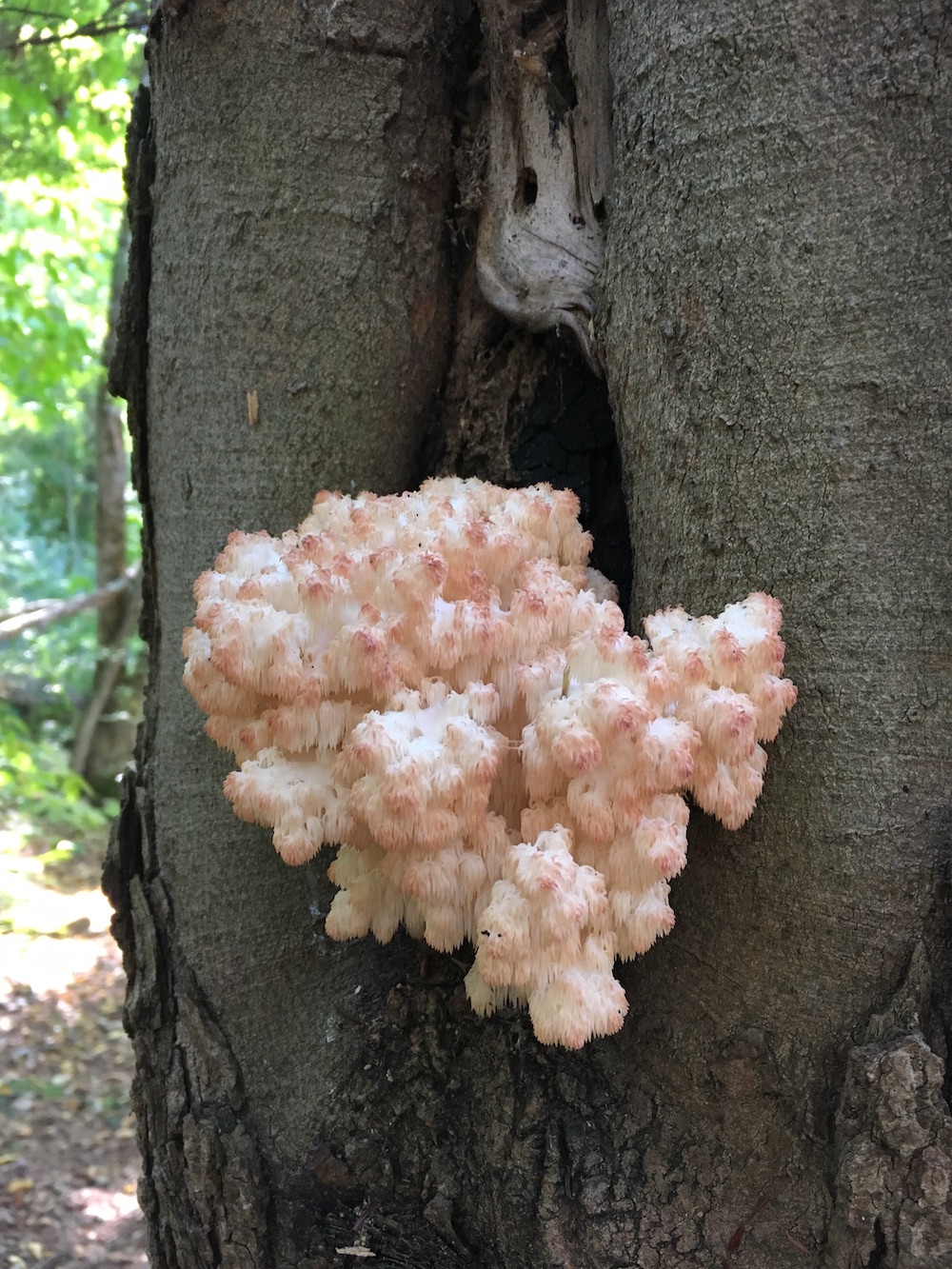 I didn’t take many photos along North Woods Trail since I had taken a few the last time. And Grouse Trail didn’t prove itself to be very picturesque that day. In fact, if you’re looking to shoot photos I don’t recommend these few trails. An upcoming hike that I’ll write about on Lee Hill would prove to be far more productive for a photographer.

Once I found my way back to Woodland Ponds Trail and that loop in the campground I followed Fairground Hill Road – the main artery through the camp – until I hit the campsite you see in-between the words Fairground and Hill on the map. The trails that are supposedly south and east of these campsites are impossible to find. In fact, I believe they begin behind people’s campsites and are not marked at all. I do not believe these should be on the map and I don’t intend to go back and try to find any more of them. I’ll leave these for the campers to enjoy. One other note: The map makes it appear that all of these campsites are trailers only. It isn’t. The trailer icon is for “Camping”. Although I saw trailers I saw far more tents. 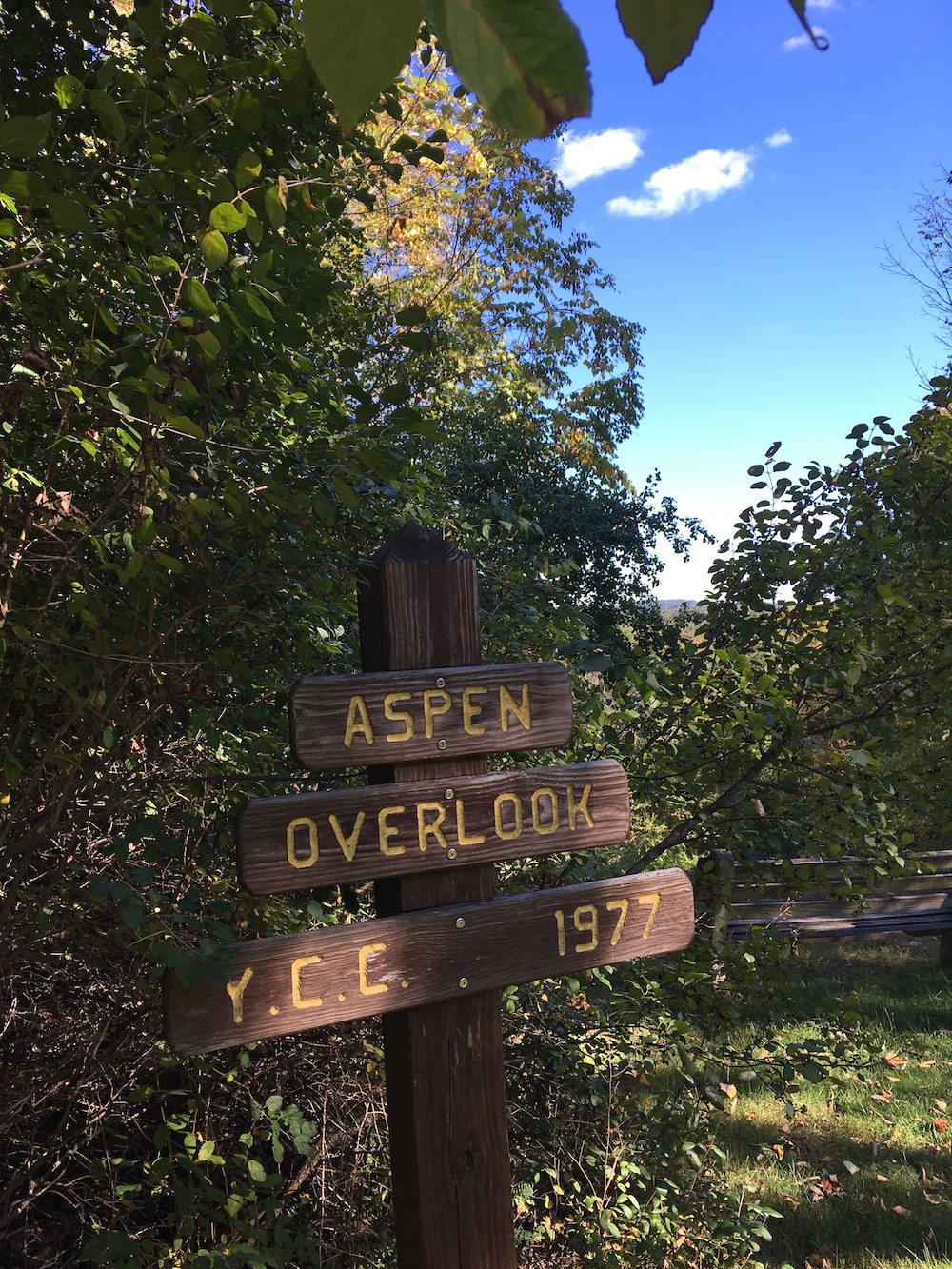 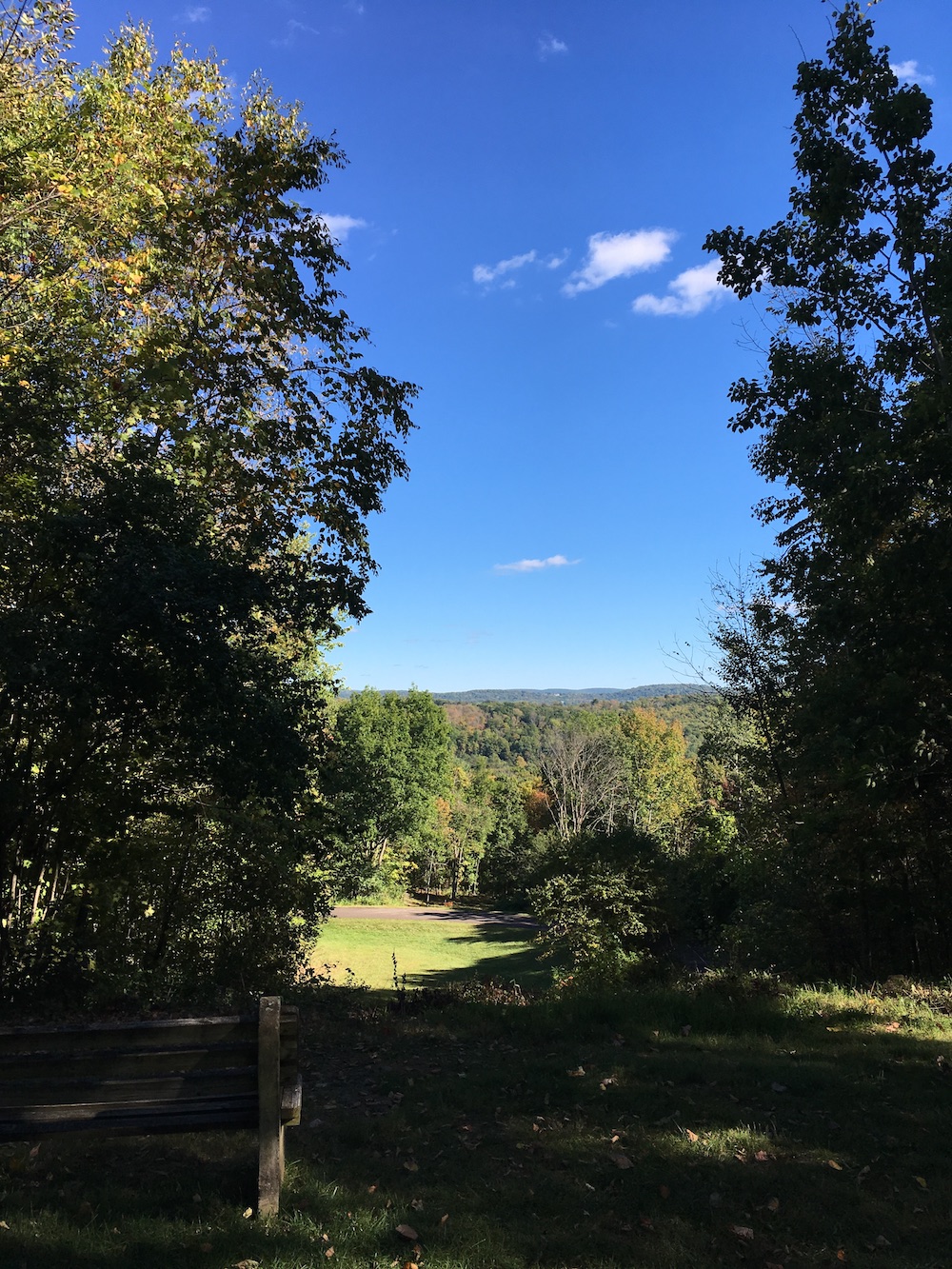 Oh, I almost forgot about Aspen Overlook. This is not marked on the map at all and it should be. Between the words Hill and Road on the map (along Fairground Hill Road) there is a bench that faces east. At this point you’re about as high as you’ll ever be in the park and so they’ve taken a few trees down and given you a beautiful overlook east down Route 524. You will see no roads, no power lines. Just a farm far out about 8 miles in the distance. If it weren’t for the rolling hills I’d be able to spot my house from that bench. Great spot to sit and sip some water.

I enjoyed going on this hike as much as any other in the park. It was good exercise and a beautiful day.